Contribution of all to achieve Education for all 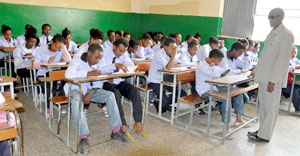 Education for all has been the guiding principle of Eritrea’s policy of education. Owing to such a principle, literacy has been winning over illiteracy. Endeavors that have been exerted towards broadening an access to education for all nationals at all levels of living standards have continued to pay off. An assessment meeting which evaluated the country’s overall educational journey and that of the last 10 years was held recently in Keren. How far has an access to education been broadened? What are the achievements registered in the last decade?

In the assessment meeting in which regional administrators, PFDJ and Government officials, heads of Education Ministry’s branches, teachers and directors of different educational institutions and invited guests took part, Mr. Hailu Asfha, head of Research and Statistics Division at the Ministry of Education, presented a detailed progress report of the last 10 years.

The assessment meeting – End Decade Assessment (2001-2012) – was then mainly focused on the details presented in a report paper which touched different educational undertakings. Hence, the achievement Eritrea registered in the education sector in general and the overall literacy programs in particular while not denying a long journey is yet to be traveled.

Following to Mr. Haile’s extensive report, the participants of the assessment meeting held extensive deliberations which covered education and childcare, education as a fundamental and universal right, literacy and lifelong education for children, youth and adults, gender equality in education, and provision of well advanced educational for all. The participants also forwarded recommendations about different topics that need amendments and also suggested that issues not discussed in the report to be covered and included as integral part of the an End Decade Assessment paper.

Taking in to consideration the suggestion and recommendations of the participants, Mr. Haile highlighted action plans that are mapped out to be implemented in the future. The participants on

their part conducted detailed discussion and shared their constrictive opinions.

A remark made by Mr. Semere Russom, Minister of Education, became a sum up of all the presentations that discussed different angles of educational undertakings. He said “Providing an access to education is not a responsibility of a sole unit or an institution but is rather a process that involves popular investment.”

The minister of education also said in an opening speech he delivered as follows: “One year before independence, that is, in 1990 leaders of different countries chanted ‘Education for All’ in a conference held in Thailand and which was organized by UNESCO. In the conference six goals were mapped out to be implemented in the years between 1990 and 2000. But, an assessment meeting that was held in Dakar, Senegal showed that despite the remarkable achievements registered much remains to be accomplished. Hence, a plan to meet a revised road map to be implemented in the years between 2000 and 2015 was charted. Eritrea has since independence joined the fight against illiteracy and much has been achieved in the last 20 years, but I would like to remind you that the challenges that await a head of us need to be addressed through a united collaboration.”

It is to be recalled that Eritrea held a national assessment conference in 2000 which discussed about developments registered in the post independence period.

Eritrea then presented in 2000 a report of the achievement it registered in the education sector in the period between 1991 and 2000 in an international conference held in Dakar, Senegal.  The report highlighted that Eritrea’s commendable achievement which was indeed a great leap towards a great achievement.

journey the country has traveled in the education sector and it would be a concrete documentation to be presented in the international conference which is expected to highlight the overall achievement different country from around the world registered in the last decade.

What Eritrea has achieved is not to be viewed lightly and is in fact unmatched elsewhere taking into account the length of its post independence period.

A five-year integrated strategic plan for kindergarten as well as a five-year general strategic educational plan have so far been mapped out and are ready for implementation, according to Mr. Semere.

Mr. Semere finally said that what is so far achieved is to be appreciated while the challenge which awaits ahead is not to be viewed lightly.

The Minister of Education finally said “we are to employ all the resource we have and utilize it at our level best to implement programs charted out for the next 15 years, particularly to ensure that every child attends his education at a nearby institution and thereby to enable all children acquire skills and thus mapping out plans that could take us to that end is of a paramount importance.”