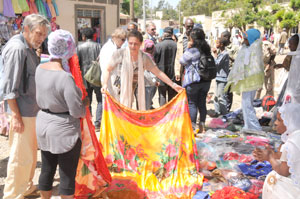 You go early in the morning around 6:30 to the outskirts of Mendefera, on the way to Adi-Quala, it is common to observe many students on their way to school to Mendefera High School, formerly known as San Giorgio, carrying with their bicycles two jericans of five liters. I have been there for several times but I have never noticed that. The very fact that we happened to be there and observe the students riding their bicycles carrying jericans has been part of the program of the Switzerland Support Group for Eritrea (SUKE) and Eritrea Hilfswerk in Deutschland  (EHD) during their friendship and solidarity visit to Eritrea.

We came to understand that the students have been carrying fresh milk from their families’ dairy farms to deliver it to the milk processing plant located nearby their school. They do that every day. The dairy farms might be very small but still they have enormous impact on the lives of those families who are engaged in the activity.

The coordinator of the visit program was Mr. Tesfalidet Mengistu (aka Gola), the Chair person of the Eritrean National War Disabled Veterans Association (ENWDVA) in the Southern region. He explained to me that what we have been observing has been part of the association’s small scale projects in the region. They call it “Bicycle Project”. And is part of the association’s programs to rehabilitate the Eritrean war disabled veterans.

In Mendefera and its surroundings there are many members of the ENWDVA who are engaged in small scale dairy farming. Every day their children carry the milk from their cows to the milk processing plant owned by the Dairy Farmers Association of the Southern region. And in addition to its intervention to assist the war disabled veterans in developing their dairy farms it initiated

the bicycle project in cooperation with partner organizations. They provide every family with a bicycle and their children deliver the milk to the milk processing plant on their way to school. They don’t have to spend money for transporting their products. That might be a small project, and it is, but has strong impact on the lives of the families.

The ENWDVA in the Southern region has about 3500 of its members who have been benefiting from projects designed by the association. And one of the effective projects is the micro-credit program. Many have benefited through the micro-credit by engaging in different activities including bee farms, vegetable farms and small scale trade. The association provides its members with financial loans and training in the field they pursue to engage themselves. Many, according to the chairman, have paid their debt and are leading a better life with their families.

Mr. Fesehaie is a member of the ENWDVA residing in Adi-Kesemti. He started his bee farm with the initial assistance of two beehives from the association. He took some training on bee farm organized by the war veterans association and currently owns more than ten beehives and is leading a better life with his family. He is well known in the area and he doesn’t need to carry his product to the market for sale. He has many customers who come to his place to buy honey. His wife and children are also familiar with the job and are engaged in the development of the project. Mr. Fesehaie alongside his bee farm is also a farmer and owns several livestock.

Ms. Mehret Tsegai has been one of the micro-credit beneficiaries the group visited in Adi-Quala. She is a mother of five children and is engaged in supplying the market with handicrafts mostly for coffee making and other artifacts. She said that she initially loaned small amount of money from the association and has already cleared her loan and is standing by her own leading a better

life with her five children.

Tesfom Negash owns a small shop at the Adi-Quala main market place. He is also member of the war veterans association. The shop looks small but we observed it holding variety of items and busy with buyers.

There are also many members of the war veterans association in the Southern region engaged with making traditional cloths with the micro-credit scheme of the association and partner organizations. All, as we observed first hand and from the information we received from the beneficiaries the micro-credit scheme initiated by the Eritrean National War Disabled Veterans Association is registering good results in improving the livelihood of its members in the region. With that everyone could expect that many members of the association from all over the

country are being beneficiaries from the micro-credit scheme.

The next visit of the combined SUKE and EHD group has been to the Anseba region region to observe the development programs in the region and especially the Begu water supply project. The project is run by the regional office in cooperation with other partners.

The Begu water supply project is aimed at providing practical solution for arid and semi-arid regions and similar projects are expected in other areas of the country. The project is designed to catch the winter time floods flowing from the upper parts of Keren through Tinkuluhas. There are about nine sand storage and recharging check dams. Around 10,000 residents in the area are beneficiaries from the dams.

The sand storage and recharging dams feed several water wells constructed as far as three kilometers from the dams. According to the residents, before the construction of the check dams they used to travel long distance in search of water for themselves and their animals. Today the water wells in their areas are recharged from the check dams and they have water availability in their backyards all year long.

The group during its visit to the Southern and Anseba region also visited historical areas and art-deco buildings and enjoyed the greenery and the stunning landscapes of the country side.

Contribution of all to achieve Education for all