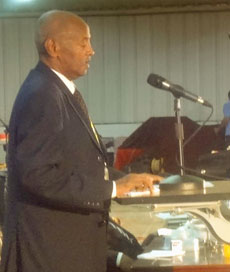 The PFDJ Secretary, Mr. Al-Amin Mohamed Seid, is taking part in the 4th General Congress of the ruling Sudanese Congress Party at the invitation of the party.

Asmara, 24 October 2014 –The PFDJ Secretary, Mr. Al-Amin Mohamed Seid, is taking part in the 4th General Congress of the ruling Sudanese Congress Party at the invitation of the party.

In a solidarity message he conveyed at the opening session of the Congress on behalf of President Isaias Afwerki, Chairman of the People’s Front for Democracy and Justice (PFDJ) and the Eritrean people pointed out that Eritrea and Sudan constitute a geo-political unit in the Red Sea region as well as the Horn of Africa and Nile River region. He further explained that the geographical proximity of the two countries has enabled them to work in partnership in different domains for the benefit of both peoples, which factor has also an influential impact.

The PFDJ official went on to state that the unity and prosperity of Sudan makes due impact on neighboring countries, and that the Eritrean people and their leadership attach vital significance to fostering enhanced partnership between the two nations.

It is to be recalled that Mr. Al-Amin yesterday held talks with Prof. Ibrahim Gendur, Assistant President of the Republic of Sudan, on the development of bilateral ties and future prospects.

According to reports, the PFDJ Secretary would hold talks with a number of Sudanese government and Party officials during his stay.