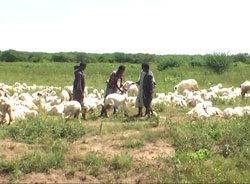 According to Mr. Serke Medhanie, head of Agriculture Ministry branch office in the sub-zone, the vaccination has been given mainly to goats and sheep, and that has been to control the prevalence of animal diseases and to ensure their health.

He further indicated that there are six vaccination centers in the sub-zone, and that awareness campaign is being conducted so that farmers bring their livestock for vaccination.

Farmers Priest Yosief Gebrekrstos and Mr. Ali Osman Ahmed said that with the end of the rainy season it is likely for the occurrence of some animal diseases, and that the vaccination would help control the incidence of the diseases.

Residents of Laelai Gash ready to collect their harvest