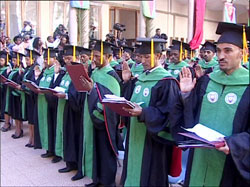 Two conferences that asses Eritrea’s educational progress of two decades have so far been carried out. What has so far been achieved and what still remains and what have been the impacts of all sorts of investments mainly directed towards providing equal access and ultimately quality education is the issue addressed in the two conferences. Bearing in mind that one’s find has an innate power to accumulate knowledge and such natural competence is, however, mainly empowered through education, Eritrea has continued to offer tuition free education for all nationals.

It is indeed worth remembering that there is nothing human mind could not reach. It is based on this outlook that Eritrean youth have been nurtured and girded with skills of different sorts. The value of education in bringing a transformation in living standards of people has never been viewed lightly and thus understanding education is a bridge that fills gaps and a road that connects all links that lead to any sort of development.

Education is in fact a priceless wealth that needs to be owned by every person. Thus, Education in Eritrea is based on a basic principle that an educated national could assist oneself and thereby could also utilize the skills acquired towards ensuring the well-being of all this fellow nationals. The Eritrean government has therefore continued to reawaken youths of the country through broadening an access to education.

It is needless to mention that all the ingredients that could make a difference are available within the mind of any person but they need to be awakened through education.  Education fills youth’s mind with a desired know-how and it is the dynamism of the youth which ultimately directed the already quailed knowledge to the benefits of all.

The Eritrean government believes that Education is a basic right of all nationals. Adhering to this far looking policy, the government continues to build schools in different regions of the country. All youth of the county have now a broader access to a tertiary level of education provided that they scored good results that meet the standards of higher educational institutions of the country.

It has been reported that an access to education has been broadened, a provision to a medical care has also been widened and networks of infrastructures have been put in place. All these are fruits of education that is accumulated in a formal or informal ways. If any person happens to hear that success story has been registered in education, in the provision of healthcare, in agriculture, in trade and industry, in mines and energy,  as well as in other sectors, such achievements come true through education and above all through a sound policy which gives an utmost value to education.

Education has also become a tool towards the implementation of a social justice for all nationals in all regions of Eritrea. Besides the educational institutions that range from kindergarten to secondary schools levels, which have almost been evenly distributed throughout the country, distribution of colleges of higher education have almost covered six regions of the country.  The lower level institutions of educations have been

feeding the required number of students’ different colleges. Therefore, broadening an access in the primary through secondary levels of education is giving an opportunity for the national colleges to   be filled with a number of competent youth who came from different parts of the country.

A number of new graduates who have studied in different disciplines and in different colleges have continued to be deployed in different work areas.  Their input in the overall nation building process is indeed not to be viewed lightly but rather to be highly commended.

What makes Eritrea’s policy of education more gratifying is that the policy is practically implemented on the ground in a way that secures the participation of all Eritreans and it strongly advocates for the rights of women.  Hence, participation of women in all sectors have been increasing as of the early days of independence and the government is taking almost a parenting role to educate women of this country though exerting efforts at its

Taking in to account the benefits of education, Eritrean youth have been making utmost use of the free educational access that has been provided at all levels of education. A number of nationals in rural areas, who have likely been away from education and thus who have not been aware of the benefits of education, have started to flock to institutions of education so as to acquire knowledge as much as they could. One could easily absorb commencement events of different institutions of higher education in each academic year. These new graduates are those who are expected to cover all educational needs of the country and this has been the fact for they have been proving that they are competent in different work areas.

Knowledge by itself is not an aim but is a tool that takes one to an envisaged goal. And if an accumulated knowledge in not put into practice it is worth noting. However, if one puts his knowledge and energy in making a difference towards ensuring a better tomorrow, the knowledge can be said is transformed from gathered information into tangible output. What Eritrea has registered so far and what is expected to achieved in the future would be the result of all knowledge and energy of the Eritrean youth.