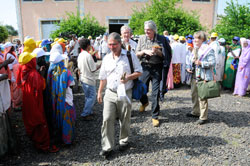 The Switzerland Support Group for Eritrea (SUKE) and Eritrea Hilfswerk in Deutschland (EHD) groups last destination during their stay in Eritrea has been to the Gash Barka region (the bread basket of Eritrea) and especially to Shemshemya Commercial Farm and in Tekombia to observe the progress of the Mogogo (smokeless oven) and donkey projects.

Upon arrival to the Shemshemya Commercial Farm the group received a warm welcome by the staff of the National Confederation of Eritrean Workers (NCEW) including Mr. Tsegay Mogos, Vice-Secretary General of the confederation. They were also given extensive briefing by Mr. Hiruy Berhe, head of administration of the project, on the overall history of the farm.

According to the briefing the commercial farm has been established in 1995 by farmers association and transferred to the NCEW. The fact that the national confederation took the initiative to run the farm has been as part of its mandate to play its leading role to strengthen farmers associations across the country. The inclusion of the commercial farm to the workers confederation has been, hence, to showcase how farmers could come in groups and establish such commercial farms and help improve their livelihood and play their part in the national development programs and especially in the efforts to ensure food security.

The other significant component of the project, according to the briefing, has been also to provide support for the farmers to establish such cooperative farms and enable themselves control the supply of inputs and materialize as well as harvesting, processing and marketing process. That in itself would contribute to the sustainable market supply to the locality as well as nationwide, create employment, and encourage farmers to introduce new technology and irrigation farming and come out from the traditional way of thinking, depending on seasonal rainfall.

The National Confederation of Eritrean Workers started its presence in the commercial farm starting in 1996 providing assistance to the farmers association especially in organizing the farm, planting different vegetables and fruits and enabling the establishment become financially viable and modern agricultural firm.

Unfortunately, the unprovoked aggression by the TPLF against Eritrea did not exclude the farm from their indiscriminate destruction of property and their malady against the Eritrean people. They destroyed the establishment with their ill motive to humiliate the farmers and discourage the farmers’ initiative to play their role in the nation building process.

Hence, the NCEW has been forced to heavily invest significant amount of capital in the farm mostly for reconstruction and rehabilitation programs. They did well and currently the farm has become one of the promising commercial farms in the country.

The farm is established on 200 hectares of land out of which 100 hectares are under cultivation and the remaining 100 hectares are covered with vegetation. The farm also includes workshops, offices, warehouses and residential quarters.

The main production of the farm includes variety of fruits including oranges, lemon, lime, grapefruits as well as some vegetables, sorghum crops and small scale dairy farm.  The cultivation is being conducted through the natural rainfall and irrigation. Since the farm is located along the Gash River bank water supply for irrigation farming is not a problem.

The farm provides the opportunity of permanent employment for 50 citizens and from 30-50 seasonal workers. The employees are all from the locality except very few professionals and administrative workers.

new structure it is expected that the commercial farm will live up to expectations and play due role in the national endeavors to ensure food security.

In the course of their visit the SUKE and EHD groups also observed the progress of the Mogogo and Donkey projects in Tokombia semi-urban center. Upon their arrival there they have been greeted by officials from the NCEW AND about 100 women who are beneficiaries from the projects. The projects are designed and implemented by the National Confederation of Eritrean Workers in cooperation with partners. The projects target mainly needy women and are provided with donkeys and two of 20 liters jericans and financial assistance to introduce smokeless ovens in their households.

The women beneficiaries say that with assistance they received from the projects they have been able to improve their livelihood and that of their families. Many are single mothers and assuming the responsibility to raise their children.

The Adhanet Mogogo (smokeless oven) besides enabling the women improve their livelihood has also environmental and health advantage. Women using the smokeless oven are less exposed to the smoke coming out from the oven. The oven consumes less wood and has significant contribution in minimizing deforestation. The projects look seemingly small ones but as we observed are very significant for they target the very needy members of the society. It is also universal truth that the prosperity of individual members of the society has a big impact on the overall progress of the country. It also attests to the efforts and commitment of the Eritrean Government to ensure social justice.

The visiting group expressed its admiration of the progress of the projects and thanked the hospitality accorded to them by both the local residents and the officials from the National Confederation of Eritrean Workers.

The SUKE and EHD visiting groups have been very impressed by the peace and security prevailing in Eritrea and the development programs in every place they visited, Central, Southern, Anseba and Gash Barka regions. Many also expressed that they would frequently come to visit the progress of the projects they visited and other projects in different parts of the country.