ERISA expected to embrace the essence of Eritrea-South Africa Partnership 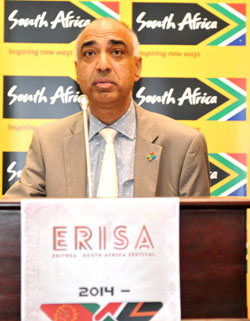 In connection with the marking of a historic occasion of 10 years since the establishment of the Embassy of South Africa in Asmara (2004-20014), an event that honors the bilateral relationship between the two countries and which launched Eritrea-South Africa Festival was held at expo in the presence of Government and PFDJ officials, ambassadors and diplomatic corps of different countries, members of NUEYS as well as Eritrean professional cyclists who are now members of a South African Cycling team MTN-Qhubeka and other invited guests.

How has the bilateral ties between the two countries been developed and what are the plans of the two parties to further reinforce the constrictive relationship so far maintained? Speeches by Ambassador Tesfamichael Gerahtu and Prof. Iqbal delivered on the very occasion of the launching of ERISA have clarified the constructive engagement the two parties opted to pursue.
Recitation of the national anthems of Eritrea and South Africa opened the launching of ERISA and the marking of 10 years since the establishment of the South African Embassy in Eritrea.

Following the national anthems of Eritrea and South Africa, Ambassador Tesfamichael took the podium to present a speech of solidarity and also to express the stance of Eritrea with respect to reinforcing the existing partnership between the two countries.

Pointing out that South Africa is among the trading partners of Eritrea, Ambassador Tesfamichael said that Eritrea’s comparative advantages that are important for South Africa are not yet exploited and thus  trade and investment and the overall relationship which is at its formative staged needs to be raised to a higher level.

Besides the economic diplomacy, cultural and political diplomacies are among the areas which Ambassador Tesfamichael highlighted.

Ambassador Tesfamichael is of the idea that such ties could be reinforced through extending linkages between research organizations and higher learning institutions as well as through fostering festivals between Sbrit and MTN Qhubeka in the cultural aspect and through strengthening ties between youth and women’s associations of the two countries, extending people-to- people relationships and generally through the expansion of public diplomacy is the political aspect.

Ambassador Tesfamichael generally said that Eritrea views South Africa as an asset and is willing to further promote regional peace and stability through promoting bilateral relationship that is marked by mutual respect and understanding which is mainly centered on complementarities.

The diplomats and all the invited guests enjoyed a beautifully composed piano solo played by Noel Araya. Following to this impressive beats of music, Prof Iqbal said that the theme “People, Liberation and Development” chosen for the launching of ERISA captures the essence of the existing relationship between Eritrea and South Africa.

ERISA is expected to be conducted annually covering wide ranges of activities including ERISA films, public lectures, handicraft, design, fashion, food and music festival, and a joint mining seminars which will be arranged jointly with a number of institutions such as Eritrean National Mining Corporation, the PFDJ, political, cultural, research and economics departments, EriTV, the National Union of Eritrean Youth as well as the National Union of Eritrean Women. South Africa’s businesses, such as BME Mining, Brewery companies, and other companies such as Senet,

Geotech Aviation, MTN-Qhubeka, DSTV among others are also expected to be part of ERISA.

The South African ambassador also said that Eritrea remains an important partner to his country. He also reiterated that his country stands against the illegal sanctions imposed on Eritrea. He said that taking into account sanctions impact negatively on ordinary people, South Africa is against sanctions and it has maintained this stance for follow sisterly countries such as Zimbabwe and Libya.

Prof. Iqbal further said “Africa cannot attain the total emancipation of its people, if we continue to accept hindrances to development. The time has arrived for further economic development for the dignity of both Eritreans and South Africans, without external meddling.”

Next to the speeches by the two ambassadors every participant of the launching event of ERISA enjoyed a solo music by Barnabas Mebrahtu and Neol Araya which was followed by Eritrean solo guayla and a song in Nara language. The guayla and the song in Nara were accompanied by three female and three male dancers respectively. All the musical performances received worm applause and one could see spark of flashlights of cameras from every corner.

The launching event of ERISA was then concluded successfully. The ambassadors of the two countries expressed views to further reinforce the existing relationship to a higher level of cooperation. Ambassador Tesfmicael’s remark about Eritrea’s commitment to work earnestly to maintain and strengthen the good diplomatic ties between the two countries and fast-track the development cooperation for the benefit of the two nations and Prof. Iqbal’s statement that says ” Our engagement with Eritrea has been mainly based on the bedrock of the development of both our peoples” is a clear indication of a growing bond between the two nations.