Festival of Eritrean community members in Riyadh and environs concludes 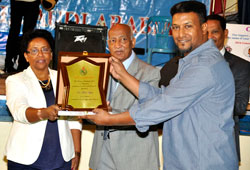 The festival of Eritrean community members in Riyadh city and its environs from 6 to 9 November has concluded in a colorful manner.

Asmara, 10 November 2014 –The festival of Eritrean community members in Riyadh city and its environs from 6 to 9 November has concluded in a colorful manner.

The festival witnessed the staging of a seminar by senior envoy of the Government and the PFDJ, general knowledge contest, sports competition, pictorial exhibition, fashion show and cultural performance by Aser Cultural Troupe from the Homeland, among others.

In the conclusion of the event, awards were presented to students of the Eritrean International Community School upon scoring higher marks in the matriculation exam and for the nationals demonstrated excellence in sports, as well as general knowledge. Moreover, citizens who made vital input in organizing the event received certificate of appreciation.

The participants of the festival noted the significance of the event towards strengthening national unity and preserving identity, as well as bequeathing the nation’s cultural values to the young generation.

The Eritrean community in Riyadh and environs came into being in 1995.

Female Eritrean nationals in Israel called upon to strengthen organization