“What impresses me most is the way stories are narrated” 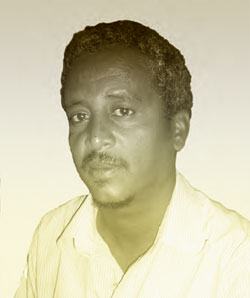 His name is Musie Mehreteab. He was born in 1970 in Asmara. He took his elementary school eductation at Edaga Arbi Elementary School, junior high school at Arbaiete Asmara school, and high school at Ibrahim Sultan. He joined Asmara Teachers Training Institute in 1998 and graduated from there. He was a member of the 13th batch of national service.  He later joined at Asmara University and graduated with diploma in English language. He is a writer, film director and translator. He also participates in producing different works of arts at the carnivals conducted every year during Independence Day celebrations.

-I know you read different books. What kind of books do you like to read?

My father has been a teacher and my uncle has been a good reader. I have been very much influenced by them to read books.

-When do you start writing?

When I was grade 9 at Ibrahim Sultan High School I produced a short story for the radio. And when it was released on the radio program I was too much motivated to produce more.

From that onwards I convinced myself that I can do more. I started sending different short stories for the radio. In 2000 I with my brother Dawit we produced a film titled ‘Kilite Gez” (two faces).

-What was the central idea of the film?

It was about challenges people encounter in their life and ways that they should take to solve their family problems. It was a kind of problem solving message. My second film has been about HIV/AIDS. That film got good acceptance by the public.

-You translated a book “The Lion King” to Tigrigna. Why did you select that book to translate?

An English lady that I met in Asmara sends me the book. And I thought that book could be good for Eritrean Children.  I translated it.

-What feedback did you get from children that read the book?

The book holds different stories that are of inspirational especially to children and those who read it liked it very much.

-Recently you translated a children’s book “Cinderella” into Tigrigna. Tell us about it.

As I told you my first book “The Lion King” had good acceptance by children. And this one, since it is for children I thought it would be good for children to have it and read so I has been convinced to translate it.

-You are also participating in producing different works of art during Independence Day carnivals.

Yes. For the last five years I have been participating in producing different works of art for the carnival events in Southern region.

-How do you synchronize your teaching profession with what you are being engaged in art?

I like the teaching profession. I worked as a teacher for about 20 years. A teacher produces medical doctors, an engineer, what have you. At the same time since the profession creates constant engagement with people, the teacher has an opportunity to learn a great deal about the culture and life of the people. And that with some kind of creativity helps me produce works of art especially depicting our way of life.

My future plan is related with producing more books especially related to children.

A mixed blessing Part I