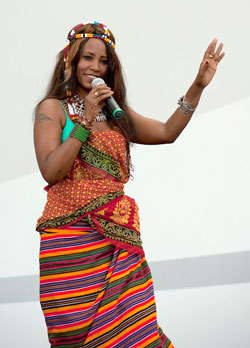 Talented people are born and not created. Education helps to broaden the inner talent to a highest level. It is true that many individuals renowned for their unique contributions in different disciplines, scientific innovations, artists and what have you are born talents observed to demonstrate their talent from early childhood with minimum level and developing it through time either through education or through the hard way, trial and error. The young Eritreans we observe displaying their innovative works during national occasions such as festivals did not get their talent through education but through researches and trials. The same applies when we come to artistic works. Our guest today is one of the renowned Eritrean artists who did not get formal education on the field but developed her talent with time through practice.

-Could you please introduce us about yourself?

My name is Dehab Faidtinga. I was born in 1964 in Asmara, Geza Banda. I took my elementary education at Geza Banda public school up tom grade six. I could not continue my education due to the hard time we had to go through. That was the time during which the fascist Derg regime has been harassing the Eritrean people indiscriminately.

-So what did you do?

I had to quit my education for about two years but later in 1977 I had to go to the field to join the armed struggle for independence.

I took my military and political training at Bilekat. And after completion my training I was assigned to the public administration department. I worked in different places including at Keren, Tokombia and Barentu. In 1978 I went to Afabet as part of the 9th batch cadres training. That was the time of the

strategic withdrawal. I couldn’t finish my cadre training because of that and I with my comrades had to move north to Nakfa.

In 1987 I was assigned together with other colleagues to the Department of National Guidance to start the Kunama radio program. But I didn’t stay there for long. The enemy began its offensive and I had to go to the front line. And later I was assigned as an instructor and translator at the Tsabra School.

-Why were you assigned there?

There were many Kunama and Nara girls that joined the armed struggle. Many of them were small girls and they were taken there to get education and my assignment was to help them as a translator and provide them political training in their language. I stayed there for about six months.

You are right; until I went to the field I had little knowledge of the language. As I told you earlier, I have been assigned to Tokombia and Barentu in the department of public administration. It was there that I developed the little knowledge of the Kunama language. They say, if there is a will everything is possible. And with that in mind I mastered the language in a few years of time.

I was assigned to the cultural troupe of the front as singer in Kunama language.

-Did you have a background in singing?

When I was a kid I used to sing and dance the whole day. Even at home I had been singing while washing clothes, studying or doing things my mother assigned me. I continued that in the field starting from the time of my military training and later in places of my assignment. And those who used to see me dancing and singing recommended me to join the cultural troupe. I could say I was born singer and dancer.

-What was your first song after you joined the cultural troupe?

It was in Kunama language in 1979 in Arag. The title of the song was “Laga Lafa Fala Fieso”. The song was about the history of Labor movement. The song got much acclamation by many and even they started to call me Miriam Makeba. I asked them who Miriam Makeba was, and that was for the first time that I heard about the renowned South African singer.

I didn’t stay with the cultural troupe for long and I was reassigned to the public administration department in Kassala, the Sudan, and after one year I came back and assigned in the same department in Tokombia. While in Tokombia I was elected as member of the assembly of the National Union of Eritrean Women’s of Tokombia district.  And again in 1988 I was back to the cultural troupe with some women of the Kunama ethnic group that were at Tsabra School. I stayed there until independence.

-Have you been to Bologna Festival?

Yes! That was in 1990 and it was my first trip to Europe. A year later Eritrea was free and I with my comrades came to Asmara.

-Did you continue your artist life after independence?

-When did start performing?

I joined Sibrit Cultural troupe. But later together with five veteran fighters we formed Shushan Band. It was all female band.  We travelled to many African countries including Ethiopia, Kenya,

Sengal to perform. With that we started creating new things that we thought will satisfy our audiences. And later we went to America and Europe as part of our one year tour of performance.

All our travel had been sponsored by NUEW North America branch and others. And I think that was the time that I could say I fully developed my talent and Eritreans all over the world start to know me well and encourage me.

-How long did the band continue?

It didn’t stay long. It was dissolved in 1997. Some went abroad and other to look after their children.

-What did you do then?

I had to go on my own. In 1996 I produced my first album “Selada”. The album was both in Kunama and Tigrigna languages. The Tigrigna lyrics were from Isaias Tsegai and the Kunama from Agostino Pietro. The melody was mine. I also produced 4 video clips. And later in 1999 I produced my first CD “Numei”. That CD was sponsored by Alliance Françoise.

-I also heard you received special award in South Africa?

It was in 2002. There was an African Women Festival in which 35 African countries participated. Thanks to the effort of then our Ambassador Girma Asmerom I got the chance to participate. The contest has been both in music performance and general knowledge. They ask you everything that they thonk would help them evaluate the contestants. That was my first experience. To the surprise of many, as it has been my first time to participate in such event, I stood 2ndand received the special award.

Later in 2003 there was an international conference in South Africa with regards environmental protection in which many dignitaries and scientists took part. I was invited to perform there. And

I performed with South African musicians. Again I received acclamation by the conference participants.

-Let’s talk about your involvement in social works. I heard you help many people living with HIV/AIDS.

I don’t want to talk about that because it is not in our culture to say I do that and did that. But in 2004 I organized a gala dinner at Asmara Inter Continental Hotel. The event was to raise funds aimed at assisting victims of the HIV/AIDS especially children who lost their parents due to the disease. That was part of my initiation to help the victims. And it is not too much.

I will soon release on album which contains songs in Kunama, Tigrigna and Hidareb languages.

-What is your hobby?

I like animals. Ones I had dogs, cats, a monkey and tortoise.

-Do you have anything to say before we finish?

I would like to thank all those who helped me in my career including Okbakedir Negash, Aklilu Tesfatsion, Samuel Almede, Gebrehiwot Tsehaie,  Girai, all the veteran fighters who helped me in providing lyrics, my fellow singers  and others who have special place during my career.