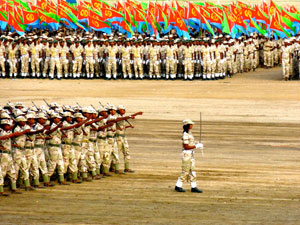 As we started our trip first destination was Sawa through Keren, Barantu, and finally Sawa. This was the first time for all of the people in the group to visit Sawa.   The trip was not hectic we spent a night in all the aforementioned cities. Again, Eritrean Youth Camp attended Sawa festival in 2004 and 2006 with a larger number of young adults. The year 2006 was the last time I saw Sawa until my trip in October of this year. Sawa in 2002 was very limited dwelling with few accommodations as the years went by there were many additions. Living quarters, cafeteria, class rooms, hotel, hospital and airport were added. Sawa had transformed from a small camp into a city.

Sawa is located in the Gash Barka Region it is surrounded by mountains; chains of mountains never ending. Starting In 1983 the Eritrean People’s Liberation Front used Sawa as their training camp and after independence it became the main training center of the Nation’s youth. The entrance is located between two small mountains as one proceeds it becomes clear that this is an educational institution  a compound of metal building partially opened as if visitors are welcome. It is within view a long drive, seen from far and over a few miles from the mountains. Once inside and past the open gates you will find office building and acres of plain land to the left. From far one can gaze at the Sawa airport. Straight forward and one will come face to face with a high rise hotel. To the left stair way is sized, cut and stored. Truck Park to the right filled with well equipped new trucks a sign that the construction is ongoing. At night it is a place out of the city; place so remote that one notices how many

stars there are in the sky and create a milk way. Its own sun rise and sun down a glow so steady and bright you can’t see anything else but the brightness of the stars. There the sky glassy flat as a pancake, thousands and hundreds of sparkling bodies all swirled together like some great extraterrestrial encrust celebrating the night with you.

Sawa was incepted in 1994 as a training center at its infancy was strictly a military training center. Military training that teaches the youth discipline, values and culture an extension of EPLF’s culture of cohesiveness, sacrifice and ethics of hard work. The purpose was and remains to be; to educate and train young nationals and prepare them to work on the development of the war torn country and to be ready for any eventuality.  Education has been given the largest national budget due to its importance in the economic development of the Nation. EPLF was a front that attained a high discipline and culture of cohesiveness, sacrifice, comradeship, political awareness and belief in hard work. Transferring these principles and values of the armed struggle Sawa was formed to facilitate cohesive nation that all nationals and different religions interact. The son of Gash Barka and son of Dankalia live together, eat, and attend school and train together. They learn to be friends, they come to know each other’s culture and value; finally they find their commune culture and become one. Sawa is the melting pot of Eritrea’s youth. Sawa was a military training center until the year 16th round there after it has become an academic and military training center. Young adults at completion of their 11th grade are transferred to Sawa “Warsye Yekalo” school for one year schooling and matriculation exam as well as a six month military training. Those who pass the exam will go to one of the eight universities and colleges.

Those who did not have the passing grade will go to the Polo-Technical training.

Since 2007 the Polo-Technical school has expanded from one year training to two years. It has now built additional 50 hungers with high tech industrial machines in total cost of $45,000,000

US dollars for three years training. It is the governments strong belief that if the nation is to grow fast huge financial scarifies has to be made and train the youth. The youth has to have education and skill to be able to contribute to the nation’s development. No Human Waste is the motto. Thousands of college graduates are contributing to the different sectors of the economy. Medical doctors, nurses and health services workers have been the main intervention in accomplishing the Millennium development goal in the health sector. The Eritrea youth accomplishments are enormous; the youth defended the nation during the war of aggression by the TPLF. Presently, they are the builders of dams, bridges, schools, hospitals and development is fast approaching the reward stage due to the skilled and hard work of the youth. It is because of Sawa that the youth has acquired education, skills and work ethic. Eritrean youth male or female has self-confidence and knows well in defending themselves and are skilled to be competitive wherever they might reside. Eritrean youth age 16 to 30 literacy rate is 90-99% percent comparative to that of the western countries. These achievements are the positive effects of Sawa’s outcome.

Eritrea achieved its independence as a result of sacrifices, hard work and discipline of the youth. Independent Nation alone doesn’t suffice the mission of the struggle but a nation that is developed awarding its nationals a meaningful life. It’s to train one that loves his or her country, family and people ready to serve them with ambition and principle of life. Knowledge, education, skill, work ethics and commitment to the Nation are the pillars of development. That is the main mission of Sawa; to have youth that are the instigators’, drivers and agent of change in the development process of the nation.

The sum of all these investment is to produce young Eritreans with work experience, knowhow and impenetrability. Youth that is educated and skilled will be productive part of society that can enhance and enrich the family and the nation.