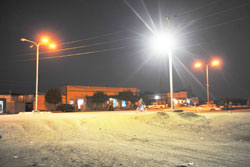 “The city has been lively, but it has now gained more life”

Teseney has been referred as a hub of agricultural and trade activities. There is a vivid movement of people and goods throughout the week. Such activities would be by far increased with an increase in the supply of electricity. Teseney has now become beneficiary of a 24 hours electricity supply. All service providers that are public or private ones would continue to give efficient service confidently without any interruption  due to lack of electricity supply.

There is no doubt that the nonstop supply of electricity would positively impact different sectors and particularly different suppliers and service provision institutions.

There is no activity that would not be positively affected by the newly installed generators. The inhabitants of Teseney have now started to express their appreciation. Among the inhabitants, Mr. Sium Tesfaendrias, who earns his living as a farmer said “We are very delighted by the new supply of electricity.”

Mr. Sium went on to say that since a number of people have begun to choose Teseney as a center of agriculture and trade and more importantly as a good place to live in, its overall population

has gradually been growing.

He further reiterated that they are grateful that the Government taking into consideration the semi-arid climatic condition of the area took measure to provide them with an uninterrupted supply of electricity that could be used for cooling systems and refrigerators.

There is a common idea that is shared among the inhabitants of Teseney. “We will all have services of all types for 24 hours owing to the continuous supply of electricity.” All those asked what really would they get benefited from the nonstop supply of electricity reiterated that no service would be interrupted due to deficit of electricity supply. Mr. Sium has, for instance, said “We are ready to give service of any kind. We already have an internet café equipped with every thing needed to open and we are looking ahead to give service as soon as possible. The city has been lively, but it has now gained more life.”

Another inhabitant of Teseney, Mr. Angesom Weldemariam has been in business activity. This youth is owner of a café. “Electricity is life,” he says “A number of employment opportunities would be opened. If I am personally to speak what I benefited from such an interrupted supply, I could say we could give better service if we are provided with such supply.”

Owing to this new supply of electricity, there would be a reduction in the price of a number of consumer goods is what collectively Mr. Angesom said as regards the overall impact of the service that has been provided.

Mr. Salih Hamd Hadgembes, a farmer, also said “This is a new life and we hope the service would be sustainable”

This time, a number of bakeries, wood and metal work wrkshops, hotels, all service giving institutions have started to operate up to their level best potential.

The livelihood of the semi-arid area is mainly dependent of electric supply. All sorts of work activities have now been awakened anew. All activities that have been carried in the agricultural also economic hub would be extensively enhanced and thus is expected to impact the national economy. Teseney has proven to be an economic hub where substantial effort of the Government has been exerted.