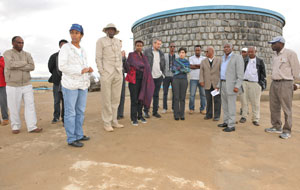 Last week a team of UN delegation has been here to conduct discussions with different Eritrean officials on topics of interest to both sides. The UN delegation headed by Ms. Leila Pakkala, UNICEF Regional Director for United Nations Development Group -Eastern and Southern Africa has visited different projects in the Central region so as to learn the true essence of Eritrea’s development undertakings. The delegation has also held a meeting with the National Union of Eritrean Youth and Students and the National Union of Eritrean Women.

The discussion the delegation held with the Government officials and ministers from different sectors have been mainly centered on how to enhance the development partnership that exists between the government of Eritrea and the UN. Such a meeting has enabled the UN delegation to have a firsthand clue about Eritrea and its nation-building endeavors.
As the meetings focused on the true drivers of economic growth and societal wellbeing, the main aim of conducting meetings with different ministries is hence to get familiarized with the activities that have been carried out with regards developing as well as improving the living standard of nationals.

In a meeting held with the Ministry of Health and Ministry of Labor and Human Welfare, the delegation had a chance to hear a briefing with regards Eritrea has been working towards creating a viable environment for its people since pre-independence period. Many of the goals that have been embraced in the Millennium Development Goal have been Eritrea’s targets before they become global goals. So, the Millennium goal is not new to Eritrea. So, Eritrea works not solely for accreditation but all its endeavors are aimed at realizing that its people are leading a healthy life style.

Following to briefings about the achievements registered in the health sector and different welfare programs, the UN delegation held discussions as regards reinforcing partnership cooperation that could lead to a better accomplishment.

There is no doubt that Eritrea has continued to register massive achievement in the nation building process. A number of areas that had no connection with the rest part of the country due to lack of viable road networks and other infrastructures have now become destinations everybody could visit in a few hours’ drive. Some areas have also become new settlement areas owing to a growing provision of social services. Dr. Giorgis, the Minster of National Development, briefed the UN delegation about the multifaceted achievement attained since the post-independence period. Dr. Giorgis also explained that Eritrea has already mapped out substantial essential development programs and is relentlessly working on their implementation.  Thus, the country never viewed the role development partners could play in the realization of the set out goals.

In a meeting held with the Minister of Land, Water and Environment, the delegation held deliberations about environmental risk reduction and recurrence desertification.  In the meeting, Ms. Leila and other representatives from the UN learned a great deal of Eritrea’s law on land, water and environmental protection.  The two parties also looked on ways of mitigating dangers of desertification.

Accompanied by different UN representatives in Eritrea, Ms. Laila and her team visited Lamza, Merhano and Adi-ke villages just outside Asmara to observe different development projects that have been implemented in collaboration with the UN.

There, in the three villages, the delegation observed the cultivated temperate fruits which are in good condition and a micro-dam in Lamza area and other water as well as sanitation projects.

In her remark about her visit to Eritrea, Ms. Laila said “Our meetings with Government officials have clearly shown the willingness and commitment on the part of the Eritrean Government to heighten cooperation and partnership with the UN and other development partners in a number of fields.”

Ms. Laila has generally expressed her observation about Eritrea as follows:

Eritrea by virtue of being in the Horn of Africa is naturally not well endowed with resources like water and this affects food security. But we saw very good examples of not only harnessing scarce resources but also effective and efficient utilization of such resources. The projects have clearly visible impact on the livelihood of the community. What makes this more interesting is the fact that community is at the center of the management of these initiatives. With these innovations, I am also convinced that, with time, food security and nutrition, which the Government has pronounced as “priority of priorities” will be a reality. What we saw only confirms the success stories we have heard about Eritrea’s progress in the health MDGS.

Ms. Laila has also urged the government of Eritrea to continue sharing information with partners for she believes potential partners and countries simply do not have information about the country.

Mr. Laila and the other members of the delegation have been impressed with what they observed during their three-day stay in Eritrea. The meetings they held with Government officials have given them a true image of Eritrea. That is why Mr. Laila said “I encourage Eritrea to use the experiences in the health MDGs to help shape the post-2015 Development Agenda. The world, and particularly Africa, needs your voice in defining its position in the next development agenda.

The delegation has also held a brief meeting with Mr. Yemane Ghebremeskel, Director of President’s office, about ways and means to further enhancing the already existing cooperation and

Mr. Osman Saleh, Minister of Foreign Affairs, has given briefings to Mr. Laila about malicious plays that have been exercised against Eritrea. But such ploys have been losing ground with the ever growing awareness about Eritrea’s constrictive engagement.

In the closing session of the meetings and the tours to the villages around Asmara, Ms. Laila said “This is just my first visit, and I am grateful for the warm and open welcome the mission has received and the very positive discussions we had. I promise to visit regularly to keep in touch and help ensure that our cooperation continues to grow steadily from time to time.”

Globalization: Crony capitalism and its effect on the African nations