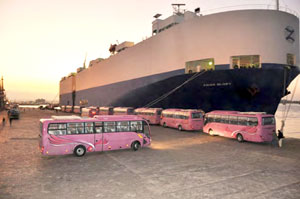 The Northern Red Sea region which embraces different historic sites and which possesses vast agricultural areas is also believed to be a cradle of human beings and all sorts of civilizations.  The Northern Red Sea region which has longest sea coastal line in the region ranks second from all regions of Eritrea in its overall geographical area. This region is bordered to the south with Southern Red Sea region, to the west with Anseba, to the south-east with Southern and Central regions, to the north with Sudan, and to the east vastly with the Red Sea. Its overall geographical area covers 35,000 sq km. its road network covers 450 km while its coastal line is about 600 km.

It also possesses pristine and long coastal area and about 300 islands, ten bays and a port and rich biodiversity are among natural endowments of the Northern Red Sea region. This region has very distinctive climatic conditions due to variation in sea levels ranging from the highest 3,000 meters above sea level to the lowest just 100 meters below sea level.  The temperature at the coastal areas is 200c during rainy seasons but it reaches 50oc in the rest seasons. However, the highlands of the region are cooler with a temperature of 300c in the highest and

Annual range of rainfall in the region is 350 mm, while some parts of the region like Easter escarpments of Ghindae Sub-zone have an annual rainfall that ranges from 700-to-1000 mm owing to two rainfall seasons.

The regions incorporates 10 sub-zones such as Massawa, Foro, Gelalo, She’eb Afabet, Nakfa, Adobha, Kerora, and Dahlak and 289 villages that are also administered in 101 administrative areas.

Most of the inhabitants of this region earn their living as nomads, agriculturalists, fishermen, traders among other activities. A recent research held in 2010 indicates that the entire region is inhabited by around 350,000 people.

The Nothern Red Sea region has about 130,000 hectares of agricultural land. Despite having 10 rivers and other sources of water, only about 92,000 hectares have been annually cultivated in the two rainy seasons. But, the agricultural potential of the region is expected to grow due to the presence of good water streams partially in the rainy seasons.

The Northern Red Sea region is rich in biodiversity. It is endowed with 1,000 verities of fish, 250 types of coral reefs, 900 kinds of sea shells and other marine resources. Apart from the aforementioned marine resources, this respective region is known for its ancient relics that could be traced back to millions of years. The ancient port city of Adulis which was the main center of trade and different development activities is also at the cradle of this region.

Evidences that show humans have started to make use of marine resources some 125,000 years back has been discovered in Abdur which is situated in Zual inlet and Buya- a historic site in Gelalo sub-zone where a 1 million years old human skull has been discovered , Sehaba mosque that is situated in Massawa and built by the followers of Mohammed in 665 AD is believed to be the first Mosque in Africa, and Biezen Monastery which was founded in 1368, and different spring waters in Irafaile, Afabet, and Mai-wu’uy are all rich tourism assets of the region. What is more is that, the trenches of Nakfa and North Eastern Sahel, Semenawi Bahri which is known as a green belt and different kinds and species of wild animals are the rare endowments of the region.

Many areas that never had an opportunity to get benefited from any social services have now started to enjoy good services of different sorts. As is affected by its geographical location, supply of potable water is not easily available in the Northern region. But, the Government has so far invested about 300 million Nakfa so as to make sure the inhabitants of the region will have an easy access to potable water. So far, 170 wells have been drilled, 300 km pipe lines have been erected, 75 water reservoirs, and 205 water distribution stations have been built.

The extensive and relentless efforts that have been exerted have at last brought a satisfactory result that 62% of the entire population of the region have become beneficiary of provision of potable water.

Ensuring healthy life style and well-being of nationals is also another area in which the Government has been very keen at. A regional referral hospital, 10 healthcare centers, 30 healthcare stations, and 15 other healthcare providers most of which constructed in the post-independence period are now giving commendable service to the residents of the Northern Red Sea region.

The heights travel distance to receive any medical care in less than 10 km.

As regards educational service, there are around 1300 institutions of education that range from kindergarten to secondary and tertiary levels. The 240 of the overall number of schools have been educating nationals in Tigre, Afar, Tigrinya and Arabic languages. This is indeed an indication that a good and equitable coverage has been given to the speakers of different languages.

Vocational Training centers in Mai-Habar and in Nakfa and Marine Science Collage in Masswa have continued to upgrade skills and know-how of nationals in different disciplines.

What has been mentioned in the social services is just to highlight the impact of social institutions. Like that all the services a network of different infrastructure have also been put in place in different parts of the region. Asphalt and dirt roads, International airport, and bridges have been constructed all of which in the post-independence period. Expansion of ports and bays are also part of the ongoing development projects in the region. There are also different development programs yet to be implemented in the Northern Red Sea region which is recurrently referred as a hub of multifaceted developments.