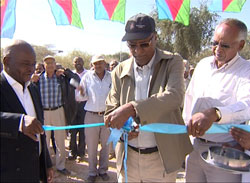 A training centre for milk production put in place by the Government and development partners at Hamelmalo College of Agriculture was inaugurated recently.

Hamelmalo, 05 December 2014 – A training centre for milk production put in place by the Government and development partners at Hamelmalo College of Agriculture was inaugurated recently. The inauguration ceremony was attended by Ministers, FAO Representative, Ambassadors and Area administrators, as well as teachers.

Mr. Arefaine Berhe, Minister of Agriculture, inaugurated the Centre and congratulated those who made remarkable contribution for its establishment.

Mr. Semere Amlesom, Dean of the College, noted the significance of the Center towards

the development of agricultural research in general and boosting milk production in particular.
Similarly, Dr. Osman Gundo, Representative of the FAO, expressed his organization’s readiness to sustain collaboration with similar Agricultural projects.

In a message he conveyed, Mr. David Ward, Ambassador of the UK to Eritrea, expressed conviction that the Centre would make significant contribution in raising student capacity and thereby play active role as regards national development.

The participants of the inauguration ceremony also inspected experimental rice plantation around the College, besides a milk production plant in Sutur area.