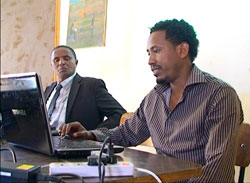 The Agriculture Ministry’s branch in Mendefera sub-zone indicated that over 10 million Nakfa has been extended with a view to raising agricultural output this year.

Mendefera, 09 December 2014 – The Agriculture Ministry’s branch in Mendefera sub-zone indicated that over 10 million Nakfa has been extended with a view to

raising agricultural output this year. It made the statement at an assessment meeting of the branch office conducted recently.

Mr. Eyasu Asefaw, head of the branch office, stated that encouraging outcome has been registered, and noted the significance of soil and water conservation activities aimed at improving the livelihood of farmers.

In a report presented at the meeting by experts of the Irrigation Development, Soil and Water Conservation, three water ponds have been put in place at a total of 3 million Nakfa. Moreover, soil and water conservation undertakings carried out in denuded areas jointly by the local inhabitants and members of the People’s Army.

Similarly, over 2,000 chickens have been provided to 84 farmers with a view to improving their livelihood, while others engaged in irrigation farming received selected potato and modern fertilizer, in addition to organizing training courses.

Speaking at the meeting, Mr. Abraham Hagos, Administrator of Mendefera sub-zone, explained that active community participation in collaboration with agricultural experts has given rise to higher output.

In closing remarks, Mr. Hailemichael Eyob, Director General of Agriculture and Land in the Southern region, said that due attention is being given to the task of ensuring food security.

Health Station under construction in Embatkala