“Education for all” Making a difference in the Anseba Region 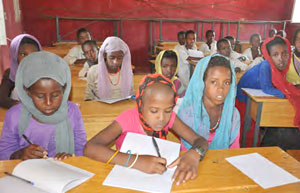 It would be an over statement to say quality education is what enables a country to have a secure future. However, what education could bring to a nation’s overall growth is not something that could be measured through scales. The benefits of education are multifaceted and, most of the time, go far beyond tangible outcome. Since education empowers the soft power of people, it is hard to say this and that are the benefits of education. What education could bring is something priceless.

Extensive efforts that have been exerted towards ensuring equal access to education for all nationals has now lead to providing quality education for all. There is almost no makeshift school and students who used to sit in stools while at school are learning in comfort in well equipped class rooms. An intensified eagerness of school children is now having a solution with the ever growing number of schools that are fairly equipped with necessary educational materials. People in aloof areas of the country have no worries about to what school they have to send their children for they are having educational institutions in their vicinity.

Challenges of pursing education, particularly in the secondary level, have also been steadily solved with a growing number of secondary schools all over the country.

Institutions of education in the Anseba region have also been growing in number as part of the overall endeavors that continued to be exerted in constructing new schools all over the country. Distribution of schools in this region does not only cover the major cities or towns but the remotest part of the region has also become beneficiary of such an ample opportunity.  As all nationals all over the country are education enthusiast, illiterate parents are very eager to send their children to a nearby institute of education.

Many children who used to herd sheep or cattle are now no longer shepherds for they are engaged in their new carrier-education. An enabling ground has been laid for them where they get educated, exchange ideas and experiences with kids of their age. Looking at the plains of Anseba region, one could not miss the widely distributed institutions of education.

Reports indicate that there are 516 villages in the Anseba region that are grouped in 11 sub-zones and 111 administrative areas covering around 22,834 sq km of geographical area which is

inhabited by around 500,000 people. Most of the inhabitants of the Anseba region are living in widely scattered areas. Around 80% of them earn their living as farmers and pastoralists. The Anseba region is known to be home for Belien, Hidareb and Tigrinya ethnic groups.

The Anseba region is bordered with Gash-Barka Region to the southeast, with the central region to the southwest, with Northern Red Sea to the northeast, and with Sudan to the northwest.
Around 93,000 students and pre-school children are enrolled in 87 kindergartens, 146 primary schools, and 65 junior and 16 secondary schools in the 2014/2015 academic year. All in all 313 institutions of education have been giving commendable service to the inhabitants of this respective region. In the tertiary level, there is Hamelmalo Agricultural College which begun to provide education for about a decade to a number of students that have an inclination in different disciplines of agriculture.

The 251 of the 313 schools are well furnished and have good infrastructure while the rest need to be upgraded so as to give the required service. What is really worth mentioning is that 80% of the institutions of education in the Anseba region are in the remote areas. Out of the overall number of institutions of education, 79% are that of public schools.

A number of students have been learning in all academic institutions of the region. More than 52,000 are, for instance, students in primary schools while 22,164 and 11,700 are pursuing their academic carrier in junior and secondary schools respectively.

While means of instruction in the primary schools is in the mother tongue such as Blien, Tigre, Tigrinya, Arabic, and Hidareb languages, junior and secondary schools students follow their education in English.

It is indeed everybody’s role to make a contribution towards a better tomorrow of today’s children who would definitely be leaders and developers of their country. Hence, in a recently held workshop, teachers, supervisors, heads of Education Ministry’s branches, members of regional assembly, heads of PFDJ, administrators of sub-zones and administrative areas, and representative of different associations held extensive discussions as regards enhancing cooperation aimed at improving the quality of education. In a two-day meeting, all parties reached an agreement to make sure that better educational service is guaranteed and mapped out work plan for the 2014/2015 academic year.

There is no doubt that there is sustainable effort aimed not only at increasing the distribution but also the quality of education which would be realized by putting in place the necessary infrastructure. Mr. Hagos Adhana, head of Education Ministry’s branch in the Anseba region, explaining bout the progress in the education sector said that 61 new schools that include residential houses for teachers have so far been established and started to give commendable service.

Also according to Mr. Hagos, the opening of new schools in the region has enabled a number of students and particularly female students, who never had such an opportunity, to have a broader access to education within their locality.

Reports indicate that the coverage of educational service that shown a growth of 33% in the 2014/2015 academic year when compared with earlier academic years. The enrollment of students has also grown by 6.3%. Literacy programs for adults has also registered good progress with the opening of more than 300 centers and vocational training centers that give services to wide range of participants.

An educational center that has been opened to give service to children with Down syndrome and Autism as well as hearing-impaired has started to show encouraging outcome, said Mr. Hagos.
The 45% of the overall number of students in the Anseba region are females and their participation in education is registered to be the highest in the 2013/2014 academic year. Mr. Hagos then called for active participation and contribution of parents and teachers so as to achieve an envisaged goal of better participation of female students.