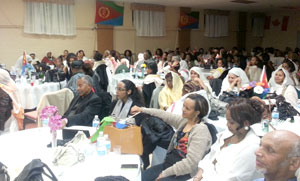 The NUEW branches in the cities of Toronto and Rome have asserted readiness to enhance role in State affairs on the basis of higher organization.

Asmara, 13 December 2014 – The NUEW branches in the cities of Toronto and Rome have asserted readiness to enhance

role in State affairs on the basis of higher organization. They made the commitment in connection with the 35th founding anniversary of the NUEW conducted.

Ms. Nitsihti Haile, Chairperson of the NUEW in Toronto, gave briefings regarding the background of the Union, and stated that the branch office is exerting the necessary efforts to enhance contribution in development endeavors in the Homeland.

Speaking on the occasion, Mr. Ahmed Iman, head of Consular Affairs in

Canada, explained that NUEW plays significant role in national affairs, and stressed the need for bequeathing the Union’s values to the young generation.

In a similar event conducted in Rome during which Ambassador Fishetsion Petros took part, Ms. Amete Debretsion, Chairperson of the NUEW branch in the city, gave briefings focusing on the projects under implementation by the branch in the Homeland aimed at improving women’s livelihood. She further expressed the readiness of the branch office to exert the necessary effort in the nation-building process.