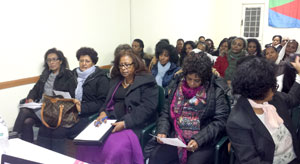 The National Union of Eritrean Women (NUEW) branch in Italy held its 3rd Conference on December 14.

Asmara, 18 December 2014 – The National Union of Eritrean Women (NUEW) branch in Italy held its 3rd Conference on December 14. The conference was attended by the Eritrean Ambassador to Italy, Mr. Fisehatsion Petros, and the Chairperson of the NUEW in Europe region, heads of community and national organizations, as well as representative of 10 sub-branches.

Speaking on the occasion, the Chairperson of the branch office, stated that the Union member are exerting the necessary effort towards bequeathing the values of the Eritrean women to the young generation and the realization of development goals, in addition to mounting staunch resistance against external conspiracies in continuation of the exemplary role they played in the days of armed struggle for

Likewise, Ms. Kidan Tesfamichael, Chairperson the NUEW in Europe, highly appraised the initiative taken by the branch members pertaining to the putting in place of a women’s center in Keren.

Reports were presented at the conference outlining the work accomplishments of the branch office over the past 3 years, during which discussions were conducted on the reports presented.

In closing remarks, Ambassador Fisehatsion Petros, pointed out that the role of Eritrean women in State affairs occupies a special place in the country’s history, and stressed the need for stepped-up endeavors towards nurturing youth members and strengthening organizational capacity.