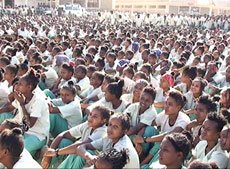 Youth Week of Warsai Yikalo Secondary School in Sawa was conducted from December 19 to 21.

Sawa, 29 December 2014 – Youth Week of Warsai Yikalo Secondary School in Sawa was conducted from December 19 to 21.

Mensura Ismael, head of the NUEYS branch in Sawa and Higher Education, said that the event is a continuation of similar activities towards raising their awareness. She also pointed out that due attention is being given to youth issues on the

part of all bodies and national Associations.

Similarly, Mr. Kelit Girmai, Director of the School, noted the significance of educated youths in the nation-building process, and that a number of activities are being conducted in the schools towards equipping them with the necessary knowledge and skill knowhow.

According to reports, education-related contests, sports activities, cultural performances and works of handcraft featured in the event, while the 4th Division emerged Champion of the Youth Week.