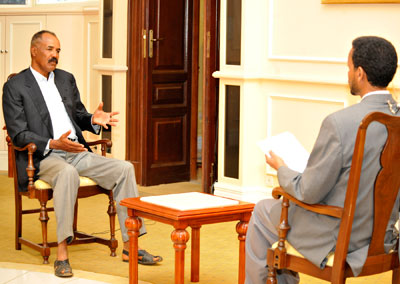 President Isaias Afwerki tonight conducted an interview with the national media outlets mainly focusing on domestic affairs in connection with the New Year.

In the interview that was broadcast live through Eritrean Television and Dimtsi Hafash highlighting all-round national and regional developments, as well as future prospects, the President shed light on the implementation and progress of development programs, nation-building programs set for implementation in 2015, the significance of formulating new Constitution, programs drawn up regarding the consolidation of the political process and strengthening the People’s Front, streamlining of programs to reward youths currently engaged in the national development process and safeguarding the country’s sovereignty and future prospects, programs envisaged to strengthen national defense, Eritrea’s achievements in the diplomatic arena, programs drawn up to reinforce popular resistance and diplomacy,  in addition to statements by the TPLF authorities to “wage invasion against Eritrea”.

In a reply he gave to a question pertaining to the substantial investment made in the domains of food security, infrastructure development and his perception for the next 3 t0 5 years, President Isaias explained that in the course of these years efforts would be made to narrow the gap as regards the lifestyle of citizens. In this regard, the year 2015 would mark a transition to a new chapter, he underlined.

In a question raised regarding the formulation of a new Constitution, the President pointed out that the nation and its leadership has acquired vital experience over the past 15 years, he underscored the significance of not only narrowing gap among the citizenry but also guarding against the surfacing of such a phenomenon in the future. In this regard, the pertinent body entrusted with the task of  formulating a Constitution that would satisfy the aspiration of generations. “The essence of this task is not to focus on satisfying external desire but live up to the expectation of generations for which immense sacrifice has been paid”, President Isaias emphasized.

Stressing the multi-faceted acts of enemy conspiracy directed against the nation’s peace and sovereignty over the past 15 years, the President pointed out that popular efforts continue at all levels to counter anti-Eritrea conspiracies, and thereby deal a crushing blow to such acts of enemy quarters.  “In this way, we shall frustrate enemy designs to keep us hostage in terms of both physical and psychological sense”, President Isaias elaborated.

Explaining that the people and Government of Eritrea continue to march on the cherished path of building a prosperous and secure nation, he wished progress and prosperity to the Eritrean people in the year 2015.