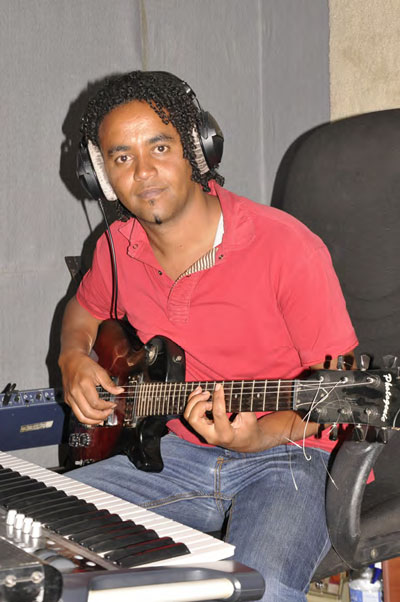 -Tell us about yourself.

-How was your school performance?

I was average student. I also have been liked with my behavior.

-How did you become a musician?

There was one guitar in our house that belonged to my uncle’s son. I used to play with it and through time I mastered playing the guitar. I also learned playing both the guitar and piano.

-Do you claim you master these musical instruments?

Ye I do because I played with them for several years.

-Recently you released an album containing ten children’s songs. What motivated you do that?

When I was a child I used to sing children’s songs. And I think not many children songs have been produced so far. Children are forced to study songs beyond their capacity. When I was a teacher at the Angel kindergarten I started doing children’s music.

-How was it when you start producing children’s songs?

It was not easy. It is difficult to produce children’s songs that appeal to children. It needs talent and patience. You have to take their ages into consideration.

-Are all the songs written and produced by you?

The four songs are mine.

The content of the songs is messages to children that they should respect and love their parents, the elderly and their country.

-What music instrument have you used?

I used keyboard and guitar.

-How did you select the singers?

The children are from 10-12 years old. And they are five in number, four girls and one boy. They are all learning in kindergarten.

-Why one boy only?

As to my experience girls learn songs better and faster than boys. And if you come to the vocal both girls and boys have similar vocal because of the little age.

-What feedback did you get?

The children and their parents liked it. Those who bought the album are asking me to produce it in a video form.

I want to continue producing children’s songs in the form of video and enable children to enjoy them with their TV screens.

The Rain in Bahrie Region of Eritrea