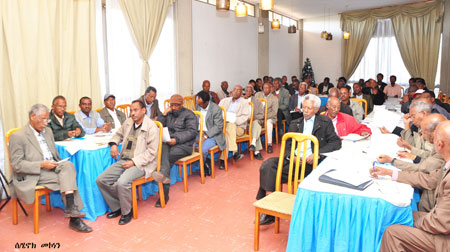 In an assessment meeting held at Imperial Hotel from 26-28 December 2014, the Ministry of Education along branch offices and technical experts of the six regions of the country made extensive deliberation to find ways and means of making use of the already gained experience in the construction of schools through active participation of communities. In this meeting different development partners have participated and learned a great deal of what has been achieved in the past.

The construction of schools has been decided to be in four of the six regions of the country but why? The reason is quite simple. The decision made for the construction of new schools is mainly aimed at minimizing the gab of access to education and thereby to secure even distribution of academic institutions all over the country.

Mr. Ghebreyohannes Hagos, Director General of Finance and Administration office of the Ministry of Education, said that all development and construction activities that have been carried out in Eritrea relaying on active participation of communities have proven to be very successful and the impact of which have been witnessing positive impact in all sorts of development undertakings. “If all concerned bodies shoulder responsibility there is no doubt about the success of such like programs.” Mr. Ghebreyohannes said.

The Government has continued to invest largest portion of its annual budget in the education sector and network of infrastructure of education facilitates have so far been put in place resulting a better access to education for nationals who were deprived of such an opportunity.

In the already mapped out project that is expected to be implemented between 2015 and 2016, the participation and involvement of communities is expected to play due role.

The Ministry of education has been making due contribution in coordinating and managing educational activities that have been carried out through active participation of communities. The Ministry has also been strengthening ties with partners in the development of education in terms of quality and distribution. According to Mr. Ghebreyohannes, around 550 class rooms including teachers’ residences along other facilities would be constructed through mobilizing communities.

Eritrean communities have a tradition of accomplishing tasks through a unified participation of community members. Mr. Membrahtu Ghilagabir, Director of Project Management Unit(PMU) in the Ministry of Education is of the idea that the new plan for setting up educational infrastructure would definitely succeed owing to the good awareness of nationals who are ready to make due contribution for a common benefit.

The plan for the construction of new schools is expected to start in the first month of 2015 and to be finished within three months so as to ensure the newly built schools have begun service as soon as possible.

Discussions points about the educational infrastructure that is planned to be implemented in four regions of the country,

about financial as well as design issues were presented the assessment meeting. Mr. Yonas Asgedom, head of engineering at Education Ministry’s PMU unit presented the overall plan along the details of implementation.

Mr. Yonas reiterated the project would defiantly succeed provided that the needed construction material and technical assistance is strictly given to the communities.

A paper that discusses about creating sound education environment was also presented. The need for making proper research before the construction of new schools was the principal point of discussion.

Mr. Semere Rusom, Minister of Education, attended in the workshop for two consecutive days and forwarded his closing remarks as follows:

To look back and make all round assessment about the pros and cons of previous undertaking has tremendous benefit for it is an enabling force to make better plans about upcoming projects. The workshop was very successful and a great lesson has been drawn from. The infrastructural plan which is already drafted would be forwarded to the Ministry of Public Works for approval and would be finally implemented adhering to the given guidelines.

Since the project involves the participation of ministries, administrative offices, and construction companies, Minister Semere underlines that there should exist and effective integration of all bodies as a determining factor for an accelerated and efficient manner of implementation.

Minister Semere finally said “As the effectiveness of community based construction of schools has been practically realized, the project should not be confined to the four regions of the country alone but would continue in the other regions too.