The Rain in Bahrie Region of Eritrea 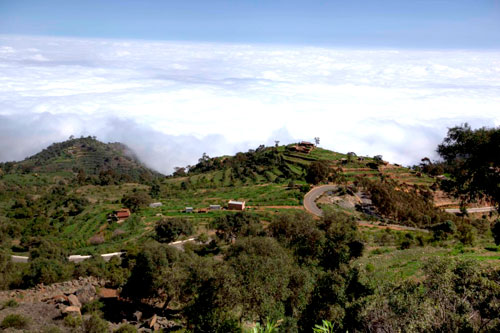 Eritrea has two rainy seasons the one most visible and talked about is the rainy seasons that starts in late May and lasts until mid September which covers  the Southern, Central, Gash Barka, Anseba and some part of the Red Sea region. The second one that is not much talked about is the one that is called “the rain of Bahrie” which starts in mid October and lasts until March. Bahrie rainy season covers the geographical area starting from the mountains of Nefasit which is 18 Kilometers out of Asmara through Dengolo all the way to the Red Sea also known as Semhar. The area has vast amount of meadow land for farming.

What one needs to understand is that the Bahrie region is not just for the rain it afforded but for the long view to the north and west fertile plains. People from different parts of Eritrea go to Bahrie to prepare the land for farming. They go early in October and return to their respected villages to retrieve their cattle for grazing starting in November and won’t return until May when they finish gathering their harvest. The mountains and vales are wild life reserve. The Semenawe Keyeh Bahrie area is a reserved national park. It is a place of many wonders and an exhilarating sight to drive through.

Semenawe Keyeh Bahrie National commons beholds stunning beauty with very bright sky with lovely dark blue color. The hill sloping down to the valley is covered in rockers and remains analogous to places like the great canon. There is little vegetation on one side of the valley, but in a short distance one could see an end to the expanse of the valley in the direction we were driving. The North side of the valley is heavily wooded down to the meadow edge and over the East side the valley was also covered in dense scattered forest. Along the grazing land the earth starts to fall down more steeply and the road follows the higher ground becoming a cliff of some 50 meters; goats and camels climbing up to feed and the road follows closely the edge of this precipice looking down to the meadow one could see that the valley is quite deep littered with goats and cattle. Lunch was at Sabur resort restaurant located 54 kilometer out of Asmara. After lunch the sun has dropped low now that only sporadic shift of light penetrate low shading strange shadows which appear to dart almost out of vision melting into forest cover. The sun reached its height, there was a fast flowing river bound on the far side forest covering two thirds of the rising ground before us. Reaching the higher ground gasped as the panorama before us spout into view. The earth dropped steeply down to a fast flowing river below. That is where one meets the mammoth river with its majestic easy flow the “Felfl-Selemuna River ”as you interlace the bridge the earth starts to rise slowly it is covered with citrus trees impossible to see what lay upfront. We see the sun through the canopy of papaya trees and judge that it has passed its mid-day yet it’s hot even on the bridge. As we passes over the large  “Fegret river” there is a village hidden deep in the low lands on the bank of the river; the view of the pass below is spectacular; river zigzagging in and out of sight like a brown-gray snake vanishing and reappearing among the heavily wooded slop below. When we rounded a twist in the path ahead we saw several houses and timber built houses, nesting among trees far from the river. It is a beautiful and peaceful looking place.

Dark clouds loomed to the South West the rain began as a thin, insistent drizzle then, as is its habit the great South West morphed into a relentless downpour and showered the parched earth. It cleansed and removed the dust from the trees lined by the roads like the cleansing of man’s sin. It cooled the baked pavement and produced a sultry fog. The red parched ditches absorbed the water carrying tiny streams down wards. We arrived at Gahtelaye semi-urban a frequented stop over for traditional coffee on the way to Massawa. The lady who served us has an intelligent face, attractive as hell. When she spoke her eyes fixed, unblinking it emits a soft wrath. She has small pointed nose, when she smiles, her lips spread wonderfully and folds her cheeks into neat, ephemeral, sunken dimples. The smiles are confident, exigent and secretive. We asked her how she was copping with the weather. She said “happy as one can be and looking for a rewarding farming seasons and especially for sweat watermelon at the harvest season”. As we drove to Massawa the landscape takes a different shape. Gone are the fertile plains and meadows far from the road one can see mountains spotted with shrubbery and scattered vegetation, a sign of rain. There are few farm areas and you can see a large mass of maize and different type of crops. Massawa city the harbor of the future of the 22nd century is a sea side city that will soon be functioning as a major international port. The old Ottoman buildings being renovated has added to the beauty of the city. The new skyline is covered in soaring trees of metal and glass, frames and twisted boughs bare for all to see a towering creation of human civilization. Pass Massawa airport headed to Emberemy villages you see the Rashadia man plowing his field and planting his milt and watermelon.

As we reached the beach hotel Gergousome it was a clear evening, the sky has no traces of cloud and the moon is out in her full beauty. It is a little chill than the summer warm evening but once you acclimatize self the chill goes away. The brilliant orange mass of the sun had just cleared the horizon I prefer the warmth of the bed until day break. But, looking at the beach of the Red Sea I couldn’t defy my innersole; had to go for early morning swim. Cruising back to Asmara was spectacular the mountains were covered with green forest trees. The twin towns of Dongolos were showing sign of the rainy season with their vegetation starting to grow. Ginda town covered with green grazing fields and citrus’ trees all over the town for one to admire. Further down few kilometers and you meet the imposing Nefasit Mountains covered with fog showing the beauty of two skies and making you fill as if you are flying rather than driving. That is what the Bahrie rainy season presented us to enjoy. A gift from Mother Nature for the Holidays and the New Year.