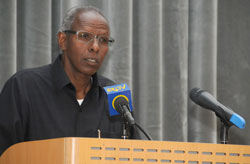 Mr. Yemane Gebreab, Head of Political Affairs at the PFDJ, said that Eritrea’s national unity is founded on the cherished values of its people, and that persistent care and nurturing is given to ensure the continuity of such an asset.

Asmara, 22 January 2015 – Mr. Yemane Gebreab, Head of Political Affairs at the PFDJ, said that Eritrea’s national unity is founded on the cherished values of its people, and that persistent care and nurturing is given to ensure the continuity of such an asset.

The PFDJ official made the remarks at a seminar he conducted for participants of the regional meeting of the World Federation of Democratic Youth (WFDY)-Africa Commission here in the capital. Mr. Yemane underlined the need for youth movements in the continent to exert vigorous effort towards resolving the problems confronting the continent.

Explaining that nationalism, social justice and human resource development constitute the three pillars of Eritrea’s national development programs, he pointed out that priority attention is being given to the task of building a nation in which  the citizenry are imbued with the spirit of dedication, a nation where equitable distribution of resources and opportunities prevail, coupled with the nurturing of conscious and organized human resource potential, and thereby ensure the guarantee and  continuity of the Homeland.

In a reply he gave to questions by meeting participants pertaining to the secret behind Eritrea’s national unity, the role of Eritrean women in leadership responsibilities, the significance of unity among African states, the role of keeping intact culture and values vis-à-vis the continuity of a given nation, among others, Mr. Yemane noted that the values of mutual respect and tolerance that the Eritrean people cherish enabled us to rally round a shared goal and vision in the days of armed struggle for independence. To this end, persistent care and nurturing are being made so as to preserve and further strengthen such a lofty national asset, he elaborated.

Moreover, the PFDJ official indicated that Eritrean women have played active role in both the national liberation struggle and the nation-building process, and that continued efforts are being made to further enhance their contribution in State affairs.

As regards unity among African states, Mr. Yemane explained that although such a spirit is enshrined in the culture of the peoples of the continent, still more efforts need to be exerted to adequately harness this vital heritage.