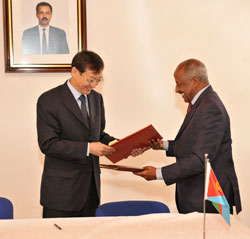 In the course of the meeting, the two sides conducted discussion on Eritrean-PRC relations and developments, as well as the objective regional and international situation. Mr. Osman noted that relations between Eritrea and the People’s Republic of China date back to the days of the Eritrean armed struggle for independence. He further indicated that the PRC is among the states that established diplomatic ties with Eritrea, and that efforts are being made to further develop such relations to the highest level.

The Chinese official on his part stated that the PRC considers Eritrea as a strategic partner in the Horn of Africa. He went to explain that his country is keen to reinforce the prevailing relations.

Meanwhile, an agreement was concluded during the talks that would enable government officials from both sides to undertake visits to and from without visa with a view to further strengthening Eritrean-Chinese relations. Foreign Minister Osman and Mr. Zhang Ming signed the agreement.

In remarks he made to Erina reporter, the PRC official expressed conviction that the cooperation agreements would be implemented on time and that the PRC would exert the necessary effort to further enhance Eritrean-Chinese ties.