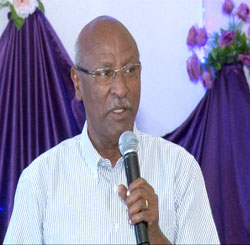 The Minister of Agriculture, Mr. Arefaine Berhe, has called for judicious utilization of land resources that takes into account future generations.

Barentu, 27 January 2015 – The Minister of Agriculture, Mr. Arefaine Berhe, has called for judicious utilization of land resources that takes into account future generations. He made the call at a meeting in Baretu city regarding the development of agriculture and land resources.

The Minister also called on agriculture experts in the region to provide the necessary consultation and information to farmers with a view to raising farm output, besides calling on to practice crop rotation system and soil as well as  water conservation undertakings for still more gratifying outcome.

In a report he presented on the occasion, Mr. Bahta Tedros, head of agriculture and land department in the region, explained that bumper harvest was secured thanks to the promising rainfall in 2014 coupled with soil and water conservation activities accomplished previously.

According to accomplishment reports presented at the meeting, bumper harvest on 224 thousand hectares, grouping farmers practicing irrigation farming on the basis of association, extending select breed of livestock for diary production and promoting enclosures were put in place last year.