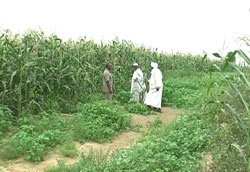 Farmers in Asus, Gindae Sub-zone said that they are obtaining promising output.

Asus, 4 February 2015 – Farmers in Asus, Gindae Sub-zone said that they are obtaining promising output. The farmers told Erina that their farms in Maqatal and Asus are in the state of being reaped.

Reports indicate that Asus, one among the villages in Gindae sub-zone, owns farm area to the size of 450 hectares.

ENWDVA secures support from its branches in Denmark, Germany and Norway