An emerging artist and son of Shawulei 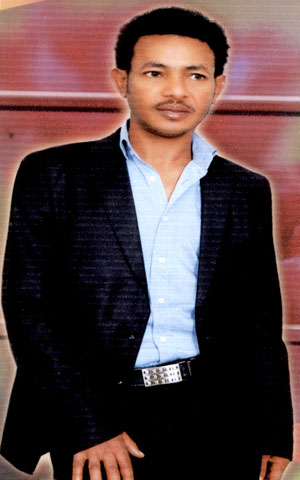 He is one of the emerging artists in the country. He is known for producing cultural songs that are well accepted by the public. He also masters Kirar, the well known cultural music instrument. He is our guest today.

-Introduce us about yourself.

My name is Merhawi Tewoldemedhin (a.k.a Wedi Haleka). I was born and raised here in Asmara. I took my elementary education at Arbate Asmara and my secondary school education at Isaak Tewoldemedin High School. I went to Sawa as a member of the 1st batch of the National Service. After completion my military and political training I have been assigned to one of the military units.

-How did you join the world of music?

At the early stage of my childhood I used to repeat songs of different singers, and I think that was when that I had the feeling and urge to become a singer. I also used to listen old songs of the 60s like that of Beyene Fre, Atowebrhan Segid and others. In 1991, I think, I started playing the Kirar (a cultural music instrument) and entertain my peer group in our neighborhood, Aba Shawul. But it was when I went to Sawa that I got the opportunity of developing my talent both in vocal and playing the music instrument I like most. During the TPLF aggression on us I was assigned with one of the military cultural troupes, and I contributed my part in entertaining and lifting the moral of the army during its struggle to defend the sovereignty of our country. Currently I am a member of the Walta cultural troupe.

-What your first song you released to the public?

My first song was Forca (literary meaning have courage). I performed the song for the participants of the Sawa Youth Festival. The response I got from the audience was more than I expected. The cheers I got from the audience was exceptional and I could not control my emotion. Shawulei is my second song That got wide acceptance by Eritreans living inside the country and abroad. The character I chose in the song is Bishat. Bishat is a well known character in Aba-Shawul. She is legendary and everyone in Aba-Shawul recites about her.

-Do you have the feedback to boldly say that the song has wide acceptance by Eritrean living abroad?

I have been to several countries with cultural troupes to perform at Eritrean festivals and other occasions. I have been to Dubai, Uganda, Italy, Germany, the Netherlands and Sweden. And in the festivals I performed the participants used to give me wide acclamation when I sing Shawulei. Many of them go back in memory to Ana-Shawul. It creates for them some kind of attachment with their Homeland. You know Aba-Shawul represents the whole Asmara and by extension Eritrea. With this opportunity I woul like than all Eritreans living abroad for the kind hospitality they awarded to us and that is part of the Eritrean mentality.

-How many songs have you produced so far?

I have produced more than 40 songs. Some on the occasion of national holydays like the Independence Day, Fenkil celebrations and Martyrs’ Day. Others are love songs, and cultural songs.

-Have produced an album?

I produced one in 2008 and it is not yet in market because of the reason I do not know. It is still in the hands of the sponsors.  And that has been the main bottleneck for not producing my second album.

-What do you think about the status of Eritrean music?

I would not say that it has developed to the level it should be. There is more to be done. Music is a collective work. All the people who are engaged in the field of music, be it lyric writers, melody writers, singers and others should come together and work for the development of the Eritrean music. Training is also a vital instrument in developing music in the country.

-Where do you get lyrics and melody for your songs?

There are artists who provide me with lyrics and melody and to mention some Samuel Almede, Tesfu Kiros and Aklilu Tesfatzion are my main providers. Without them I would not who I am today.

-You seem to be well connected to the residents of Aba-Shawul. Why is that?

I am working on my second album and I wish it would have wide public acceptance like that of Shawulei. I also want thank all the artists who are on my side during my artistic career.

-Have a good luck!