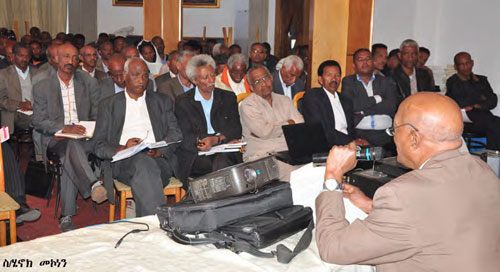 The Ministry of education conducted a two-day annual assessment meeting from 29th to 30th January 2015. In the meeting held at Embasoyra Hotel in Asmara, annual report of the Ministry’s Department of General Education, students’ summer work program, current situation of boarding schools, media and adult literacy program, information and communication technology (ICT), Research and Human Resource development and other activities that are related to education and cultural issues among others were topics of discussion.

In a speech he delivered in the opening of the workshop Mr. Semere Rusom, Minister of Education, said “The year 2015 would be a transition of the country’s great leap forward and thus the Ministry of Education has to redouble efforts in order to realize that vision.”

The minister of education has made it clear that exerting extensive effort towards achieving a better educational access to nationals is what is expected to be carried out in this year. Indicating that Education has continued to be among the leading sectors in which huge investment has been made globally; Minister Semere said that the Government has been extensively investing in the development of human resource.

Highlighting that encouraging out come has been registered in the expansion of distribution of schools at a national level, Minister Semere said that now “Due focus is to be given towards providing quality education”

An annual report by the Department of General Education discussed on the publication of academic books from KG to Secondary school levels. Mr. Mussa Naib, Director General of the Department of General Education gave briefings about different activities of the department that have been carried out in the 2014 and that are postponed for implementation in 2015.

According to Mr. Mussa, civics books for grades 4 to 8 have been finalized. While 3rd grade physical education book is already ready for publication that of 4th and 5th grades are underway. “We are working to finalize ICT Books for 8th grade” Mr. Mussa said.

Mr. Mussa’s report shows that books for first and second year levels of kindergarten are also under development while self study material, software that teaches Arabic for 7th graders, is being prepared. Educational songs that reflect on culture and environment would be soon available in all languages of the country. Preparation of Brail books, and publication of history, biology, chemistry, mathematics and geography and training teachers to enable them be competent for multi-grade teaching are among the activities postponed to be implemented in 2015.

Also in Mr. Mussa’s report, it is highlighted that the situation in makeshift schools is not yet improved. Thus, due attention needs to be given to such schools.

The annual report of the Department of General Education was discussed intensively and a number of constrictive comments and suggestions were forwarded that are important towards addressing the challenges that have been negatively affecting the outcome of education.

Adult literacy program has been among the areas in which Eritrea has been registering remarkable out come. Mr. Ghebrezghi Demam, Head of Medial and Adult Literacy Program, said that due focus has been given to ensure that literacy program sustains without setback.

A report by the Department of Media and Adult Literacy program shows that the participation of students in adult literacy program has shown a growth of 12%. What is more is that students from Gash-Barka region who have educated themselves in the program were made to participate in 2014 national matriculation exam.

Providing vocational trainings to around 1000 nationals and enhancing the participation of students in literacy program particularly in areas that have been lagging behind are among the plans to be carried out in 2015 by the Department of Media and Adult Literacy Program.

It is to be recalled that a number of graduates from different institutions of higher education have been deployed in different work areas. This achievement is in fact due to a collective effort that continued to be exerted at individual, institutional, and governmental level.  A report by the Education Ministry’s Department of Research and Human Resource Development is what fallowed next.

Mr. Petors Hailemariam, Director General of Research and Human Resource Development in the Ministry of Education, said that different training programs have been given and thus 42 students who studied social and natural science teaching practices at Eritrea Institute of Technology were graduated in 2014.

This department has been making due contribution in the process of training students and deploying graduates to their respective work areas. Providing training courses to around 80 KG teachers is what the Department planned to be carried out in 2015. What is more is that English language proficiency program for female students’ is also expected to be conducted in a joint effort with partners.

Student Summer Work Program has been carried out since 1994. The achievements registered through this program could not be calculated in terms of money. The efforts exerted to redress the natural environment, to control soil erosion and to preserve water resource indeed goes far beyond what could be normally expected.

Besides carrying out of activities in planting seedlings, the students have been engaged in the construction of terraces, renovations of dirty roads. What is most likely unique is that technical school students have been engaged to activities of school furniture repairs. “Deploying less number of students and making remarkable achievement is what has been witnessed in the Students’ Summer Work Program of 2014,” said Mr. Fitwi Weldegergish, head of Students’ Summer Work program in the Ministry.

Information and Technology is what continued to make a remarkable difference in the education sector. And thus efforts have been made to equip different schools with ICT facilities. Besides putting in place the physical infrastructure, different training courses have also been offered to a number of trainees. According to Mr. Alem Habte, head of ICT in the Ministry of Education, 104 trainees have become beneficiaries of the training provided for 2 months in late 2014.

Empowering ICT labs through equipping them with latest computers such as in Tserona and Koatit and other part of the country, installation of solar energy in boarding schools and other schools that do not have supply of energy have been among the major activities that were carried out in 2014 and that would be reinforced in 2015.

Enabling all nationals who have difficulty to pursue their educational carrier due to different reasons is among the priorities that have been given in an attempt to narrow the gaps in the distribution of schools.

Pointing out that boarding schools have definite mission of narrowing gaps thereby alleviating challenges caused due to an uneven distribution of schools particularly in the rural areas of the country, Mr.  Fsehaye Kidan, head of boarding schools, said that Eritrea has been cited in UNESCO’s report as an exemplary country for having fictional boarding schools.

The workshop that continued for two days has also discussed the issue of culture and the importance of having cultural troupes and music schools and also empowering cultural activities through deployment of culturally aware professionals.

Solar energy is a game-changing prospect

An emerging artist and son of Shawulei