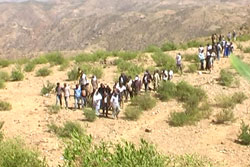 In a speech he conducted at the ceremony conducted on 6 February in which Government and PFDJ officials in the region, members of the Regional Assembly and representatives from the two villages took part, Mr. Frewengel Teklehaimanot, administrator of Mai-Mine sub-zone, said that the land dispute between the two villages that existed almost for hundred years has been due to the divide and rule system of the colonizers, and that thanks to the wise decision and determination of the elders from the two villages the dispute has been resolved.

Mr. Tesfai Berhane, head of Political Affairs of the PFDJ in the region, stressed that the participation of the public in all social affairs attests to its developed social values, and called on the residents to resolve any kind of difference in such a wise manner.

Ms. Fana Tesfamariam, Managing Director in the region, on her part explained that the policy of the divide and rule of the enemy was to extend their hegemony on the people and country, and called on others to follow the good example of the two villages in resolving their differences.