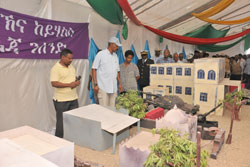 The fighters’ associations are displaying different activities depicting the heroic feat of the liberation fighters during the Operation Fenkil.

Massawa, 13 February 2015- The fighters’ associations are displaying different activities depicting the heroic feat of the liberation fighters during the Operation Fenkil.

The exhibitions include the gear of the fighters, communication, and war planning as well as the trenches that have been constructed and living condition of the fighters.

The sculpture by artist Mulugeta Woldetensae depicting the coordinated assault by the foot soldiers and tanks to cross Sigalet Ketan and the sacrifice paid is aimed at transferring the heroic history of the liberation fighter to generations.

Fighter Tesfai Gebrehiwot the driver of the tank “Tiger” that was one of the tanks which crossed Sigale Ketan said that the program took him back in remembrance of his fellow fighter who gave their lives during the operation, and called on the youth to understand the outstanding history and strengthen participation in the national development programs.

The visitors on their part indicated that they found all the displays portraying the heroism of the Eritrean people, and called for putting the items that have been exhibited on permanent places so that generations could learn from it.