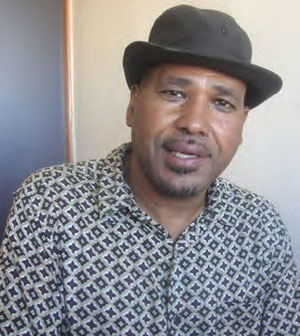 He is one of the artists of EPLF who produced a song depicting the victory of the liberation fighters during the Fenkil Operation of 1990. Artist Alazar was born in Segeneity, Southern region, 1962.

What motivated you to join the armed struggle?

Did you go alone?

I remember I have been 15 years old. I went alone to Dekemhare. It has been also liberated. I registered with the public administration office of the EPLF there and I went with other youth to Adi-Roso.

And how did you join the world of music?

After the training I was assigned with one of the cultural troupes as a guitarist.

You also produced a song about the Fenkil Operation. Could you tell us about that?

The lyric of the song was from Marty Mehreteab Gebremedhin and the melody is mine. It at the time during which Fenkil Operation was

conducted and Massawa has been freed from the enemy. I was not a singer before that and I was asked by the cultural troupe the sing it. I said alright. And that introduced me with the public.

What is your impression hearing that song every year with Fenkil Operation commemoration?

I always remember the hadship we had to go through during the operation. The massacre of the Derg regime on the residents of Massawa after the liberation of the city. I also remember the condition we were in when I produced the song. I have a lot of memory.

What did you do after independence?

I produced an album with 10 songs in Saudi Arabia. And after I came back home in 1999 I again produced my second album. I am also currently producing my third album.