The Liberation of Massawa: Year 1990 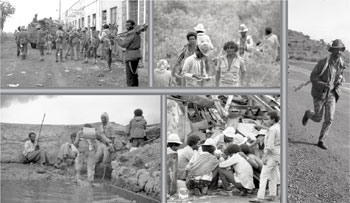 February is the month of the essence when the hours of the darkness and the nights are long in Eritrea. Each day becomes significant because the month draws to the celebration of “Operation Fenkle” liberation of Massawa in 1990. People from all walks of life are in deep reflection and stirring their mind reaching its climax.

I mean; it’s time to think what we’ve learned from the past.  Celebrating the start of freedom and correlating the past. Glancing at history, no so ancient history the record of something that had been documented the past 80 to100 years has offered us. Looking back at sacrifice’s our nation paid, the unjust that was brought about by colonizers upon the Eritrean nation and people is countless. We can’t choose our history it is what it is, but we will remain resilient and celebrate our victory.

History states that the Italian encroachments started in 1882 and lasted until 1941. The Italian colonizers took the best fertile lands from the locals and converted them to major commercial farms. There was racial discrimination during the Italian governance. Nevertheless, Italians built Asmara from a small village into a city with wonderful architects’, built roads and many economically viable small industries. on the other hand the British who defeated the Italians in 1941 literally looted Eritrea; such as cement factory, Massawa port goods, the Tel-Ferican the list goes on; looted goods were moved to Egypt, Sudan and India countries under British colony. During that period the British advocated the split Eritrea into two; awarding the lowlands of Eritrea to Sudan its colony and the highlands to Ethiopia. Britain and USA were responsible to Eritrean’s annexation with Ethiopia and Ethiopian government’s belligerence and the many sacrifices and sufferings of the Eritrean people.

The years of colonization were years of mass massacres by the consecutive Ethiopian regimes. During Haile Sellasie’s regime 1962 to 1974 in Eritrea countless of people were killed, villages burned, animals slaughtered and hundreds of thousands of people were displaced many Left for Sudan. February 1967, in today’s Gash Barcka region the Ethiopian army burned 62 villages, murdered over a thousand people displaced 40,000 families and 60,000 animals were slaughtered. In the Semhar and Sahel area in July 1967 villages were burned while people were inside their huts. In Southern and Central region villages were burned, people were murdered and thousands of animals were slaughtered.

After the overthrow of Hailsellasies government by the communist Derge regime what we saw was the outright theft and targeting the dominant rich’s wealth by nationalizing private property in favor of the few communist elite. The communist government turned the country into killing fields. It killed its own people and countless of atrocity were committed against the Eritrean people. The Derge’s first act of violence was in Omahjare, Gash Barka region, in 1974 where 250 innocent people lost their precious life. 24 people were burned inside while praying in a mosque; many were killed by bombs and machineguns 76 people drowned in river Setite. The killings continued in 1975 Central region Wekiduba and the capital city Asmara were targeted and many civilians walking on the street of Asmara were gunned down. Churches, villages and small cities were burned; animals and valuable goods were looted. In 1975 the total value of property that was destroyed and looted was estimated to be $13,900,000. Diyal Togracen: Washington Post 3-14-1975 article “Ethiopian Army kills hundreds of people” confirms these facts.

The TPLF regime what we witness is a minority ethnic dominant group that perpetuate war mongering governess, propagate deceit and mendacious, refuse to vacate from Eritrea territory and ethnic cleansing of rich Eritrean- Ethiopians. Eritrean tycoons were treated as ethnic outsiders and generated mass ethnic resentment. In Ethiopia, Eritreans long constituted a starkly successful merchant class the relatively prosperous Eritreans were expelled en masse. Between 1998 and 1999 the Ethiopian government deported en masse 52,000 Eritrean in classic ethno-nationalist fashion. They were separated from their families, businesses, pensions, and bank accounts subject to expropriation. “Jealousy, revenge and greed”; journalist had called the action “economic cleansing”.

As we celebrate the 25th year of the liberation of Massawa we need to remember the atrocities that are committed by regimes in Ethiopian and stay alert for any eventuality. Treasure our success and remain committed to our independent economic and political policy; a promise to our martyrs’ that have offered us the opportunity to celebrate “Operation Fenkle” Liberation of Massawa.