Fenkil Operation On Its Silver Jubilee 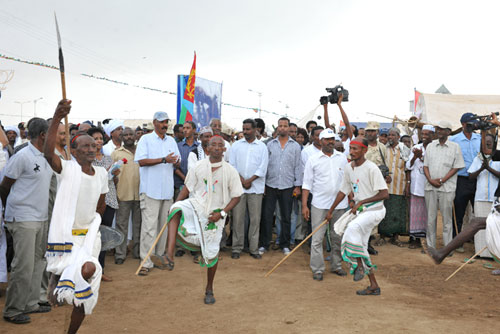 It has been a quarter century since the historical Fenkil operation took place in the port city of Massawa. This victory operation indeed ignited a strong and intensifying excrement in total uprooting of colonial powers in a matter of months. This was finally realized with the achievement of the country’s full independence. So, Fenkil operation is continued to be commemorated as the back-bone of all sorts of emancipations which are now being enjoyed by all nationals.

It is known that the port city of Massawa has become the heart of all sorts of movements which are in fact the fruits of a hard won liberation. What is more is that the city is a hub which harbors the heroic deeds reflected through the remnants of war that are kept as reminders for future generation. The inhabitants of Massawa and nationals from different parts of the country as well as from abroad are now united in the city to remember the huge sacrifices paid for a common cause.

To commemorate the silver jubilee of Fenkil operation, the inhabitants of Northern Red Sea Region have made necessary preparations, of course, along with fellow nationals with a great patriotic zeal.

What makes this year’s commemorative event different from its presiding ones is, the ceremony is venerated its silver jubilee decisive chapter in the country’s history. The city and the pilgrimages of Fenkil operation are enjoying an optimum and welcoming weather. All the streets are now embellished with banners of colors, mosaic of lamp lights, the national flag and slogans that portray and beautify the occasion.

The Fenkil operation is among the most decisive operations which accelerated the journey towards Eritrea’s independence. Attending the honorable event enables visitors to feel nostalgic of past events. This year’s celebrations of Fenkil operation is taking place from 12 up to 15 February 2015 under the theme ‘Fenkil: Harbinger of Total Liberation’. All the shows that have been staged in different pavilions are portrayals of Eritrean heroic feats.

On the first day, His Excellency president Isaias Afwerki, in honor of the Eritrean fallen heroes, laid wreath at the Tiwalet Martyrs Monument for the official opening of the 25th jubilee of Fenkil Operation in the presence of higher government and PFDJ official, army commanders ,religious leaders, diplomats and invited guests. similarly, PFDJ secretary Mr. Alamin Mohammed-Saeid, Army Chief of Eritrean Defense Forces Major General Philipos Weldyohannes, President of Eritrean women (NUEW) Ms. Tekea Teklemichael, Administrator of Northern Red Sea Region Ms. Tsegereda Weldegergish and Mayor of the port city Massawa Mr. kidane Weldeslasie, respectively laid wreaths in honor of the fallen heroes.
After the official opening, all the visitors headed to the Tiwalet coastal areas, where all shows and exhibition that depict the hurdles of the operation as well as the livelihood of the Northern Red Sea region inhabitants are well staged.

President Isaias pay a visit to every pavilion and observed all the cultural shows and exhibitions. The pictorial exhibitions are presented by the

Ministries of Information and Defense, which highlighted the brave action of EPLF forces in different stages of Fenkil Operation. This exhibition has displayed the real picture of fallen heroes who paid their lives in the liberation of Massawa. Moreover, different armaments of freedom fighters military sand sketch of the northeasters Sahel trenches and the like have been presented by Ministry of Defense; different former units of EPLFand the Eritrea Navy have also been staged in Tiwalet. The huge gap in weaponry supply that existed between EPLFand that of the colonial rule is vividly shown in the graphic and statics presentation displayed in the pavilion of the Ministry of Defense.

Furthermore art work like painting and sculptures that represent the bravery of freedom fighters are also vibrantly showcased by the information and agitation bureau of Defense Ministry.

The Eritrean Navy has also come up with different real objects, most of which are highly information about sea safety matters. The Eritrea diving center has also brought some diving materials and pictorial exhibition that show diving activities and pictures of coral reefs.

Different shows by the 10 sub-zones of the Northern Rea Sea region have reflected the overall natural and historic resources and relic of their respective sub-zones. Traditional show about live hood of the ethnic group of Afar, Rashayda, Tigre, Tigrnya, Saho and Hidareb have also been part of the celebration activates other

As part of the Fenkil celebrations, a lively carnival show was presented and attracted visitors. The carnival that depicts the heavy struggle for independence was accompanied by a steam locomotive in which different cultural shows, banners, and displays of different works of art among others were staged. The inhabitants of different administrative areas of Massawa and students and representative of the nine ethnics groups Eritrea marched on the streets starting from Htumlo area to the city center.

In addition, 15 km athletics contest organized by the ministry of defense and cycling race. Among Massawa junior teams added caller to the celebrations atmosphere. Sudanese culture group and Walta cultural troupe have showed a night long shows to the participants of the celebrations.

Views and historical accounts that narrate the battles fought in liberating Massawa were presented by veteran freedom fighters. What is more is that in the morning hours of 13th February 2015 NUEW’S training center was inaugurated in connection to the official celebrations.

The week of Fenkil operation celebrations would continue until 15th February with different delighting and informing programs and activities of the 25th jubilee commemoration.