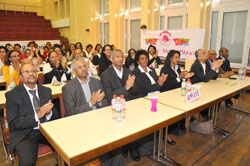 The National Union of Eritrean Women’s branch in Europe has held its 9th Conference on February 14 and 15 in the German city of Frankfurt.

Asmara, 18 February 2015 – The National Union of Eritrean Women’s branch in Europe has held its 9th Conference on February 14 and 15 in the German

Representatives from Italy, Switzerland, Netherlands, France, Denmark, the UK, Sweden and Norway took part. Present on the occasion were, Ms. Tekha Tesfamichael, Chairperson of the NUEW, Eritrean Ambassadors to the European Union, the UK and Ireland, France, Italy and representatives of national organization.

The participants of the Conference conducted discussion on reports accomplishment presented on the occasion elected a managing Committee.

Commending the pace of development drive and safeguarding the nation’s sovereignty by the Government and the people in the Homeland, the conference participants adopted resolutions pertaining to exerting stepped-up efforts towards organizing the youth and sustaining follow-up of Women Training Centers that have been put in place in a number of towns here, among others.

Ms. Tekha Tesfamichael, Chairperson of the NUEW, gave a seminar to the participants focusing on the objective situation of the union and the support the branch is extending aimed at reinforcing the NUEW.