Fenkil Operation: 25th Jubilee of the Total Uprooting Of Colonialism 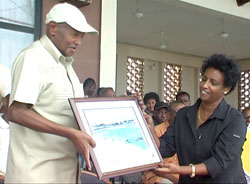 A stage in the middle of the sea in the heart of the port city of Massawa, the audience sitting in the coastline, boats and ships creating a beautiful back ground through an attention grabbing movement just a few meters behind the glowing set stage surrounded with palm trees and also the refreshing sea breath intensifies the excitement of the pilgrims of the Silver jubilee commemoration of Fenkil Operation who waited keenly to see what is yet to be performed in such enthralling scenery.

A song titled “Memherey”(My Teacher) by Rezene Alem became a pioneer of the show staged on 14 February 2015 which begun at 4:00 pm. The song is just about the commitment and selfless sacrifice of all Eritrean freedom fighters whose noble deeds are well cherished in the minds of all nationals.

What followed next is a song in Kunama language by Andu Saleh which reflects typically the tradition of the Kunama ethnic group. Five pairs of female and male dancers wearing colorful ornaments and beads of different colors and their full of vigor movement makes one stay engrossed and focused on the show.

The well beautified stage stayed worm with the ever flowing works of art. A drama tilted “Meseta Fenkil” is all about a daughter of the fallen hero visiting Masswa to celebrate 25th anniversary of her birthday along with the Silver Jubilee of Fenkil Operation and to commemorate the 25th year of her father’s martyrdom who gave his life to liberate Massawa.
The drama also narrates a history of a freedom fighter (father of the daughter) who paid his precious life to save the life of his fellow but wounded fighter. So, the narrators of such a noble and brave act of such a martyred fighter are his wife who is also a fighter and a survivor close friend.

“A fighter weeps but lets his tears flow inwards” are words uttered by the former freedom fighter who is now a mother. Wrapped in deep thought for a while in the course of sharing the history of her husband’s bravery to her daughter and the hard to bear loss she continues to feel every moment in her life is what makes her say such heart touching words.

The spirit of the fallen hero also speaks to his daughter saying “My history is the only gift I have for you; cherish it and stay committed to inherit the noble values.”

The drama also conveys a positive criticism to the living freedom fighters for not documenting and sharing their experiences about the history of the struggle for independence in which they are part of. Despite being the doers of the heroic feats, they have still remained reluctant in sharing the incidents of matchless war engagements to the world.

Another comedy drama which makes the audience burst in laughter was also performed by two male and female siblings- Nftalem and Selihom Yohannes.  The musical dram written by Yonas Mihreteab (Minus) is mainly based on the song titled “Aba-blhatu” by Netesreab Gehbreyesus (Wedi Shawl). This song along with some conversation lines between the siblings have never let the attention of the audience being deviated. The song by itself is very comic which tells a story about the swift, surprise attacks of the EPLF in different battles in a relaxed and rather entertaining manner.

Bahri- a song by Somomie Mharay and another song by Abrhet Ankere were presented to the audience whose eagerness has continued to be intensified with each and every performance.

A song in Arabic language by Sudanese musicians titled “Fenkil” tells a story about the historic Fenkil Operation, about Masswa city and also embraces a theme that reflects the hard to believe bravery of gallant Eritrean freedom fighters. The poem for this song is written by Eritrean Mohamed Al hajj Mussa. The song depicts how the fighting and the spirit of the people were? “It gives us a good and strong picture about what happened in the history of this country” said Mohammed Hamid Juar, Sudanese composer.

“Gazatena Fenkil”(Journalist in Fenkil Operation) is also another drama staged on the sea. Documentation activities of fighter journalists and photographers who were professionally forced to tolerate not only bombardments of war planes but also sad sceneries of casualties on civilians are what the drama reflects. The fighters as well as journalists find themselves in dilemma. They have to capture the war incidents but they are morally touched to spare the lives of injured civilians. If they fail to capture the painful realities of war, there would be no document that would be transferred to future generation thus they reluctantly forced their conscience to adhere to their profession rather than saving lives.

“Are we going to die?” is what one of the two siblings who were severely wounded by the bombardments of war planes said.  The elder of the two replied “No, we are not”. This is an actual story captured during the war to free Massawa. “We are not going die” but we would rather prevail against all odds and stay alive beyond the expectation is the message conveyed thorough this drama. The show continues with the staging of songs and dramas in different Eritrean languages.

The president said “We will never be exhausted to live up to martyrs trust and we would stay committed to secure our pledge to them.”

Ms. Tesegereda Weldeghergis, Administrator of Northern Red Sea region on her part said that Massawa is now witnessing a fresh air of independence all the dreadful stories of war and shelling of weaponries are all gone in memory and replaced by development endeavors thanks to the heroic feats of the freedom fighters along the people of Eritrea who made the miraculous operation a reality.

The week of celebrations of the Silver Jubilee of Fenkil Operation which started on 12th February 2015 with the official opening with laying wreaths at the Martyrs’ Monument in Tiwalet and continued with presentation of cultural shows, exhibitions among others and with communal gatherings of four administrative areas of Massawa that continued until 15 February 2015.
In  the evening hours of 15 February  10 sub-zones of the Northern Red Sea Region have been awarded for their participation in construction of traditional houses, traditional livelihood, exhibition, and an overall traditional shows they performed in the silver jubilee of Fenkil operation.

Hence, in the construction of traditional houses and traditional livelihood Nakfa, Afabet, and Ghelalo sub-zones were awarded from first to third respectively. In exhibition, Ghindae, Massawa and Foro sub-zones were ranked from first to third, while Adobha, Ghelalo and Afabet sub-zones were awarded as first, second, and third respectively in the overall traditional shows.
The awarding event which marked the closing of the Silver Jubilee of Fenkil Operation has been very lively in which all traditions and cultures of the country came into one platform. The two-way roads of Sigalet inlet were all filled with cheerful dancers and chanting of different traditional songs.

The Re-Colonization of Africa by Agribusiness

“Our Earnest Dream Has Always Been For a Better Future in Eritrea and Sudan.”