The Re-Colonization of Africa by Agribusiness 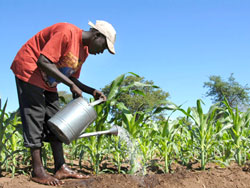 Most of the world’s food is grown by small scale farmers. While it is called “traditional” agriculture, it is never static and farmers constantly adapt. This traditional agriculture relies on a varied and changing mix of crops which provides a balanced diet, is affordable for local farmers and can accommodate changing local conditions.

The Green Revolution relied on increasing acreages of monocultures, mostly cereal grains, which also increased the use of herbicides, insecticides and fertilizers as well as new varieties of high yielding crops. Inputs that small farmers, those who fed the people, were never meant to afford.

It was an unsustainable system that called for too many inputs, too much machinery and too much energy. Credit was an essential part of the Green Revolution creating debts that could never be repaid. And it did nothing to empower women, who grow a considerable portion of the world’s food. It gave them no access to education, no power, and made it more difficult for them to maintain the rights to their land. Most importantly, the Green Revolution did not end hunger.

The Green Revolution never met expectations in Africa. This was for many reasons, including: civil wars, corrupt governments, governments that often could not work together, inaccessibility of water for irrigation, very diverse soil types, a lack of infrastructure and the sheer breadth of the continent. Perhaps Africa was lucky, while the Green Revolution was put forth as a solution to feed the hungry, it was also focused on permanently allowing Western governments to dominate politics and national economies a new brand of colonialism.

Now, as global agribusiness interests look to expand their profits with the financial backing of the World Bank, the International Monetary Fund, United States Agency for International Development (USAID), various “charitable” foundations and the political backing of the more “developed” countries of the world (the G-8), Africa is the obvious target to be saved and developed. Corporations profit, Western governments gain control.

In a new twist to the old Green revolution, AGRA is focusing on private control rather than public more profit, less oversight. A prime example, private seed companies will produce and sell their “improved” seed varieties to farmers, rather than giving farmers access to publicly developed seeds.

While most countries in Africa have no commercial plantings of Genetically Modified (GM or GMO) crops, many are conducting trials, aided by and politically pushed by Western governments.

While AGRA claims their partners are not currently selling GM seeds in Africa, the push is clearly there.

AGRA states that “only about one quarter of Africa’s small-holder farmers have access to good seeds” and good seeds, in the eyes of AGRA funders and partners, are GM seeds, seeds that must be purchased every year, not farmer-saved seeds. Traditional seed laws that allow saving and exchange between farmers are “outdated” according to AGRA and they continue to push for changes in seed laws that would protect patented seed.

As Mariann Bassey Orovwuje of the Environmental Rights Action (ERA)/Friends of the Earth Nigeria (FoEN) noted at a Town Hall Forum in Seattle last October, “if you are helping me, ask me the kind of help I need.”

Mercia Andrews, of the Trust for Community Outreach and Education (TCOE) in South Africa, sees AGRA and the Green Revolution as “another phase of colonialism.”

“What we need,” she stated, “is not more charity and more investment of the kind that’s being imposed on us, we need solidarity, we need learning together from you, from the peasant farmers, from the food movement, all these small markets that exist here, from the community to community movement. People to people solidarity, not corporate takeover.”

Mariam Mayet, director of the African Centre for Biosafety (Acbio), noted that “I want you take home the message that there are African farmer organizations that are outraged, we are angry because these decisions have been made imposed on us in a very patronizing, patriarchal, violent way, like we are children, that they have designed a solution for us as to how they can fix up what is broken.”

In his address to the Triennial Forum for Research in Africa General Assembly on July 18, 2013, Dr. Kanayo Nwanze, president of the International Fund for Agricultural Development (IFAD), stated that “Africa can feed Africa. Africa should feed Africa. And I believe that Africa will feed Africa.” And, interestingly enough, he didn’t once mention GMOs.

Just as AGRA would force its program on Africa, Nwanze felt that the decline of African agriculture, in large part, was due to structural adjustment programs forced on many of the continent’s nations by the World Bank. And cutting to the heart of the Green Revolution he noted that “if we set our sights only on improving productivity, there is a very real danger that we will grow more food in Africa without feeding more people.”

He stressed that “results must be measured not by higher yields alone, but by reduced poverty, improved nutrition, cohesive societies and healthy ecosystems. And, agricultural development must involve women who are too often… the most disadvantaged members of rural societies.”

AGRA believes progress is large scale farming, mono-cultures, “improved” GM seed, and a further industrialized agricultural system. However, none of these have ended hunger. This style of agriculture did not not and will not feed the world, though this is what we are constantly told to believe.

In his book, Farmageddon Brewster Kneen notes that “In the name of progress, these new powers would like us to believe that there is no alternative to their biotechnological project. They are simply the agents of destiny. We should adjust to their rule with gratitude for their leadership and their efforts on our behalf, whether we asked for it or not.”

Colonialism is patronizing, patriarchal and violent, and to believe that AGRA’s vision for Africa, Africa’s people, its farmers, or the continent itself is anything other than a new colonialism designed to benefit corporate agribusiness and the partners of AGRA while it ultimately impoverishes the people and the culture of Africa is not just laughable, but unequivocally misguided and dangerous.

Fenkil Operation: 25th Jubilee of the Total Uprooting Of Colonialism