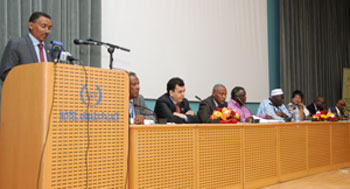 In the opening ceremony in which Ministers, senior Government and PFDJ officials, heads of international associations and organizations, Ambassadors, as well as invited guests took part, Mr. Tekeste Baire General Secretary of the National Confederation of Eritrean Workers (NCEW), said that the Organization of African Union Unity is one of the independent African organizations which ardently advocates for the rights of and the umbrella  of workers, and that the symposium would help in forwarding supporting ideas that could help the organization in overcoming the different challenges that are standing in front of it.

Mr. Francis Atwoli, President of the OATUU, on his part indicated that one of the basic tasks of the Organization of African Trade Union Unity is to firmly stand for the rights of workers, and that the objective of the symposium is to reform and strengthen the organization.

Likewise, Mr. Arezki Mezhoud, Acting Secretary General of OATUU, stated that the demand of workers is universal, and that important ideas are expected from this symposium so that to look at the African workers demand in terms of that.

In the symposium that is expected to convene until 24 February, research papers with regards workers job opportunities, international challenges, the importance of peace and stability in Africa in ensuring opportunities and unity have been presented, and that the participants conducted extensive discussion on developing the agenda 2015 of the organization, experience of other countries and organizations in overcoming workers challenges.

The participants also visited the photo exhibition organized by the National Confederation of Eritrean Workers.
.