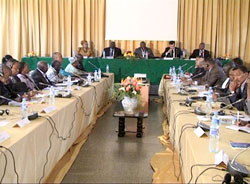 The Organization of African Trade Union Unity has today conducted its 38th Session of General Council at the National Confederation of Eritrean Workers’ hall here in the capital.

Session of General Council at the National Confederation of Eritrean Workers’ hall here in the capital.

In the opening remarks he made, Mr. Francis Atwoli, President of the Organization, pointed out that the session is aimed at harnessing possibilities that would ensure and realize the interests of the organization.

He went on to state that the objective situation of work and working people at global level is in a dynamic change, to this end the Organization would make significant contribution as regards enhancing African Union and regional consolidation, ensuring safe work condition and workers’ basic demands, and gender equality, as well as active youth participation through making effective assessment and restructuring.

In the course of the session, in-depth discussions were conducted pertaining to assessment of the Organization’s accomplishment, reports of executive and financial committees, in addition to issues which need priority attention.

It is to be recalled that the Organization of the African Trade Union Unity has conducted symposium at Asmara Palace Hotel on February 23 and 24, besides holding an interactive meeting with President Isaias Afwerki, focusing on challenges African Workers Organizations are facing.