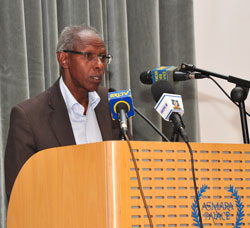 The people and Government of Eritrea welcome the Organization of African Trade Union Unity and all delegates to the 38th session of its General Council and the International Trade Union Symposium. It is and honour for us to host these important forums. The rights and dignity of workers and all working people in the current realities in Africa and globally as well as the role of trade unions and of international solidarity are issues of paramount importance.

The following is Eritrea’s position paper in the matter, presented briefly in eleven points, in bullet-point form, in the interests of time.

1-    Workers and all working people and their organizations, particularly trade unions are an important force in national, continental and global struggles for peace, development, human dignity and social justice.

2-    The trade union movement built over centuries of workers’ struggle and at one time a formidable and influential political, economic, social and cultural force has been in decline and on the defensive for several decades. It has not recovered since it was subjected to a massive and sustained assault beginning in the 1980s, the heyday of unfettered and unregulated domination of finance and the so-called “structural adjustment programs,” which were imposed on working people and developing countries. It was claimed then that there was no alternative approach and the resistance of trade unions was crushed, their organizations dismantled and weakened. It is true that lip service continues to be paid to the central role of workers and their rights and organizations but the reality speaks otherwise.

3-    The setback suffered by the trade union movement is part and parcel of the rolling back of many political, economic and social gains and interests previously won by the masses of ordinary people. Today we live in a world of unprecedented inequality, inequality of both power and wealth, where the increasingly fewer wealthy and powerful become wealthier while the livelihood of the overwhelming majority gets worse. While the rich are bailed out by governments, the cost of the protracted global economic crisis is borne and paid for by the people in the form of unemployment, wage cuts, loss of income and opportunities, forced migration and the sinking of members of the middle class into poverty.

4-    Today our world is also witnessing continual war and violent conflicts, many of which are major conflicts involving the powerful countries as major players. The past 15 years of continual war have caused immense devastation, not only physical and economic, but also the fragmentation and disintegration of nations and the break-up of the social fabric of societies, as witnessed in Iraq, Syria, Libya, Somalia and other countries. This situation and the narrow-minded and sometimes reckless approach to the raging conflicts have also provided fertile breeding ground to extremist groups who engage in wanton brutality and carnage.

5-    In the current realities, the achievement of the rights and dignity of workers and all working people requires positive, fundamental change at national, continental and global levels in Africa, the Middle East and the world; as it is clear that workers’ right cannot be assured in nations that are beholden to foreign powers and routinely flout the rights and interests of citizens, in countries that are racked by violent, sectarian conflict; in a world of gaping inequalities dominated by few.

6-    At the national level, workers and their trade unions and other organizations that seek to secure their own rights and interests, need to become an integral and organic part of the struggle of all the people for nations built on citizenship and social justice. In our view, a nation built on citizenship is one where governments and rulers do not exploit diversity of ethnicity, religion and sect to divide the working people, to maintain themselves in power and to loot the country’s resource. A nation built on citizenship is also a nation that provides equality of opportunity, where all citizens have access to basic requirements and services needed for decent lives. Indeed, citizenship is devoid of all meaning where a few wallow in luxury while the majority live in squalor.

7-    At the level of Africa and the Arab world (a vast of which is in Africa), a continent endowed with vast natural and human resources, the struggle

must aim at ensuring that these resources benefit first and foremost the African people and the development of African economies and societies. We must also struggle for clean, competent and effective governments that serve their people, region and continent and not themselves and their external   patrons.

8-    Internationally , a global situation  that is fraught with grave danger to human beings and the environment requires that working people  and their allies wage a determined struggle for a peaceful and better world; for quality livelihood, sustainable development and social justice; for more equality within and between nations; for an end  to constant war and unwarranted external intervention.

9-    These national, continental and global objectives are shared by the overwhelming majority of people, of all nations and faiths, of different walks of life and occupation, holding a diversity of political and ideological views. It is thus clear that workers and their trade unions need to link hands with and embark on a common effort with all working people, youth, woman, peasants, nomads, professionals, intellectuals as well as patriotic and socially-responsible entrepreneurs.

10-     For workers to play a key and crucial role in this broad social movement for positive change , they need, not just to reform, but to rebuild their organization and the trade union movement, to regain and carry to a higher level their power and influence. This will require a clear vision, a well thought out program, a determined effort and strong solidarity and unity.

11-    As to Eritrea, our people and government, the People’s Front for Democracy and Justice , the National Confederation of Workers, the youth, women, and professional  associations are ready to shoulder our responsibility and make a modest contribution as benefits our modest means to the African and global effort for a world of dignity for all.

Long live the solidarity of all working people!

The Warming World: Is Capitalism Destroying Our Planet? Part I