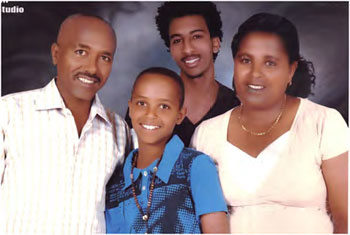 They are two veteran liberation fighters, Kifle Tewodros and Tiebe Abadima. Kifle joined the armed struggle for independence in 1983 while Tiebe joined in 1985. They after completing military training Kifle has been assigned to Brigade 4 and participated in defusing the enemy 6th and 7th offensives. Later after the EPLF reformed its military formation to division level, Kilfe was assigned to Division 96 supply unit.

Combatant Tiebe joined the armed struggle in 1985 and after completing her military training she was assigned to the same division and unit of Kifle. That was where they met. After some years they fall in love with each other and were married in February 1990. Their marriage day coincided with the EPLF’s Operation Fenkil that has been conducted to root out the Derg occupation forces for the port city of Massawa and its environs. The couple celebrated their Silver Jubilee of their marriage exactly in the week the Eritrean people have been celebrating the Silver Jubilee of Operation Fenkil.

-You were married some days before the start of the famous Operation Fenkil. Tell us about that.

We were 60 couples that conducted our marriage ceremony with the tradition of the EPLF. Our marriage ceremony took place on the eve of the Fenkil Operation. That was part of the life of combatants. Some get married today and the go fighting tomorrow.

-Did you have the clue that the Fenkil Operation was to happen?

We had no clue. Our division has been stationed at Halhal front and we were expecting may be there would be some kind military operation to Keren. Our commanders were with us during our marriage ceremony. They spent the day with us and left in the evening. Even when we heard that Brigade 49 is moving to Semhar we took it as normal military maneuver. The operation was kept very secret.

-Did you not suspect that there would be some kind of military operation when you hear that some of the combatants who celebrated their marriage with you moved with their Brigade to Semhar?

In the field it has been normal to see that some units change places. We were celebrating our marriage. And the movement of the Brigade had been taken as a normal military process.

-What did you feel when you heard that Massawa was liberated?

It was a very emotional day. Our happiness was beyond expression. The celebration has been endless. It went on for a week. Everywhere was shooting to air to demonstrate our joy.

-Did you feel bad for not participating in the operation?

Kifle-Every combatant wants to participate in any military operation. That is why we went to the field in the first place. Every combatant has been there to liberate the country from the yoke of colonialism. But military has its own rules. No one is allowed to take rules in their own hands.

I took our brigade that joined the operation as lucky one. The same with those who have celebrated their marriage with us and who joined the

operation. We use to take participating in battles as normal way of living of the combatants. Our objective has been to liberate Eritrea and missing from such operations makes every combatants feel some kind of selfishness.

-When did you go to Massawa?

Kifle-I was there when the Derg regime was bombarding the city killing innocent people indiscriminately. The massacre committed by the Derg over the residents of Massawa has been brutal and I remember it to this day.

-Were they martyrs from your comrades that celebrated their marriage with you?

Yes! I don’t remember their name, but definitely there were some martyrs who paid their lives for the liberation of Massawa.

-What would you say the fact that your silver jubilee of your marriage coincided with the Silver Jubilee of Operation Fenkil?

-What about you, Kifle?

Our existence of today is the result of what we had to go through in the past. It is always good to remember the past. And Operation Fenkil is one of landmarks in the history of the Eritrean struggle for independence. It has already been 25 years. We are happy that we are living happily with our two sons. There are many who didn’t get such a chance. And this day should not be confined only for celebrations, we have to remember those who paid their precious lives to make this day true.

-Thank you very much!