Eritrean Airlines begins new flight from and to Asmara-Port Sudan 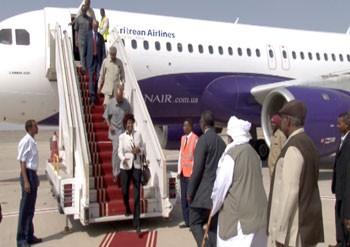 The Eritrean Airlines has begun new flight from and to Asmara-Port Sudan.

Asmara, 28 February 2015 –The Eritrean Airlines has begun new flight from and to Asmara-Port Sudan.

The inaugural flight at Port Sudan International Airport was attended by Ms. Askalu Menkerios, Minister of Tourism, and other senior Eritrean Government and PFDJ officials, as well as officials of the Sudanese Red Sea region. The event witnessed the staging of artistic and cultural performances by Eritrean community members in Port Sudan.

Speaking on the occasion, Ms. Askalu stated that

launching of the flight is a continuation of the developing cooperation of partnership between the two countries. She also noted that the vitality of the flight as regards strengthening the historical ties of Eritrean-Sudanese people and developing the tourism sectors of both countries.

Dr. Mohammed Tahir Ella, Governor of the Sudanese Red Sea region, stated that the people-based relations between Eritrea and Sudan and the flight would make significant contribution to Sudanese who desire to spend their honeymoon in Eritrea, in addition to facilitating the movement of people between two countries.

NUEW striving to ensure equitable women participation in all domains