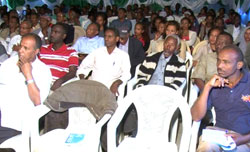 At a recent assessment meeting conducted in Barentu city, it was stated that the Saving and Micro Credit Program is making vital contribution as regards improving citizens’ livelihood.

Barentu, 28 February 2015 – At a recent assessment meeting conducted in Barentu city, it was stated that the Saving and Micro Credit Program is making vital contribution as regards improving citizens’ livelihood. Speaking at the meeting in which members of the program from various regions took part, Col. Andemariam Gebremedhin, Director General of Finance and Administration in Gash-Barka region, pointed out that the program has been launched in support to nationals engaged in farming and rearing of animals, and stressed the need for reinforcing it on the part of all government bodies. He also outlined that many inhabitants of the region have been benefiting from the scheme.

Mr. Tafla Asmerom, Acting head of the Program, indicated that the objective of the program is to inspire nationals with low income to mange improve life through providing credit opportunity, and that a 5-year strategic plan charted out to increase the amount credit to customers and raise the interest rate to 95%.

In the report presented on the occasion by Mr. Goitom Habtetsion and Mr. Tedros Haile, heads of Operation and Finance of the Program, respectively, noted that credit coverage has been expanded thanks to  higher dedication of the staff members and the administrative and control of the program has shown improvement. They further called for active cooperation of administrations and other government bodies in all activities of the program.

According to reports presented at the meeting, the number of village banks increased to 609 and the number of customers reached to 56 thousand and over 350 million Nakfa has been distributed to customers last year.