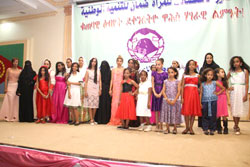 Eritrean community members in Jeddah and its environs have commemorated International Women’s Day in a colorful manner.

Asmara, 06 March 2015 – Eritrean community members in Jeddah and its environs have commemorated International Women’s Day in a colorful manner.

The observances also witnessed the staging of performances highlighting the dedication and heroic feats of Eritrean women, inauguration of works of weaving and fashion designs by the NUEW branch members in Jeddah, in addition to an exhibition by students of the Eritrean International School.

Mr. Saleh Mahmud Sabe, head of public affairs at the Eritrean Embassy in Saudi-Arabia, congratulated Eritrean women in general that of members in Jeddah in particular. He further noted the significance of women’s economic progress vis-à-vis promoting national development.

Similarly, Ms. Nura Haj Ali, head of the NUEW branch, gave briefings focusing on the accomplishments registered and called for active role of members towards strengthening the Union.

Certificates of appreciation were handed to mothers who patronize families of fallen heroes and needy citizens.