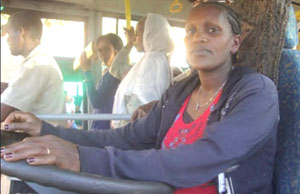 Ms. Zaid Asgedom was born in 1979 in Asmara. She took her elementary education at Mai-Hiwot school and her junior high school at Hadenet.  She went to Sawa with the 5th batch of the National Service. And upon completion her military training she got the opportunity of training as a driver.

She stayed in Sawa for about six months a driving instructor. She later has been employed at the National Insurance Corporation as a driver and as heavy machine operator. From January 2014 is working as city bus driver in Asmara.

Why did you quit your education and went to Sawa?

My elder brother told me that he is going to Sawa and I simply did not want to separate from him and simply I went to Sawa. He was living in Massawa and came home to say goodbye.

So you did not have time to prepare?

I had nothing. I shared what he had.

You are one of the 4 city bus drivers in Asmara. How come you joined that?

I was a mini-bus driver at Harat Transportation Company. While working there a notice has been posted inviting drivers with 4th driving license to apply for the job. I applied and passed the exam and here I am.

How did you feel when you were told that you passed the exam?

I was very glad. I was also glad to witness that our bosses gave women the attention they deserve. Secondly I am glad that I am one of the first

How do you remember the first day you were given the key to drive?

It was in the afternoon hours. I was very much exited but I did it.

How did you find the job?

It shoulders you huge responsibility because you are providing service to many passengers. You have also to give attention to the disabled and others with different problems. You have a big moral responsibility.

At the National Insurance Corporation you were working as an operator of Forklift. Tell me about that.

Nobody gave the training to operate the Forklift. It has been just through observation others doing it.

What were you doing as an operator?

I was transporting cereals from the warehouse to the factory. It was half day work.

For how long did you work there?

We would be celebrating March 8, International Women’s Day. Do you have any message to convey to women in that connection?

As a custom a lot of jobs are occupied by men like driving city buses. But today many women are being involved in driving city buses, mini-buses and taxis. Many Eritrean women have also made miracles during the armed struggle for independence and I would like to urge them to do their best to transfer the good societal values of Eritrean women to the young generation.

The Warming World: Is Capitalism Destroying Our Planet? Part II