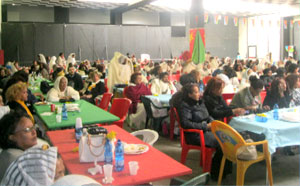 Asmara, 10 March 2015 – Eritrean women residing in South Africa, Italy, Denmark, Egypt, Lebanon, UK and USA have asserted readiness to enhance contribution towards the realization of cherished national development goals through raising all-round capacity. They made the pledge at respective commemorative events in connection with the 35th founding anniversary of the NUEW and International Women’s Day.

Speaking at the observance in Johannesburg city during which a number of Eritrean nationals took part, Mr. Saleh Omar, the Eritrean Ambassador to the Republic of South Africa and southern Africa region, said that the Day occupies special meaning in Eritrean history as part of the immense sacrifices paid by Eritrean women to ensure their rights.

being constructed by the NUEW branch in Keren city.

Moreover, in a commemorative event, the NUEW branch in Copenhagen has asserted readiness to sustain input in the nation-building process through enhancing cooperation with national organizations.

In the same vein, the Eritrean women residing in Cairo and Beirut stated that the Commemorate event attests higher sense of attachment on the part of the members with the Homeland and voiced commitment to nurture young members who would uphold national values.

Meanwhile, Eritrean women in the UK cities of Manchester and Nottingham, as well as the NUEW branch in Boston and Seattle have asserted readiness to step up participation in development endeavors.