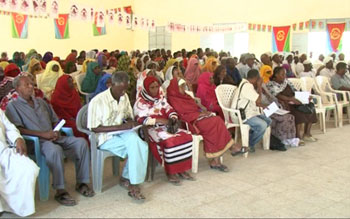 At seminars in Agordat town, a call has been made to raise all-round female participation in general and in educational and political spheres in particular.

Agordat, 13 March 2015 – At seminars in Agordat town, a call has been made to raise all-round

female participation in general and in educational and political spheres in particular. Briefings were also given focusing on the active role Eritrean women played in the liberation struggle and safeguarding the nation’s sovereignty, as well as the nation-building process.

prevailing female participation at national, regional and institutional level, in addition to the competence and steadfastness they had demonstrated in various domains. In this regard, he called on female youth members to keep intact the values of Eritrean women and enhance role in endeavors to do away with harmful customary practices.

The regional PFDJ Secretary further underlined the need for organizing promotional activities on the part of the NUEW and pertinent bodies as regards higher community awareness.

Similarly, Ms. Yihdega Yohannes, Chairperson of the NUEW branch in the region, stated that commendable accomplishments have been registered towards ensuring women’s equal participation, and that the Union would exert the necessary effort for still more gratifying outcome.

ESECE to be conducted from 16 to 22 March