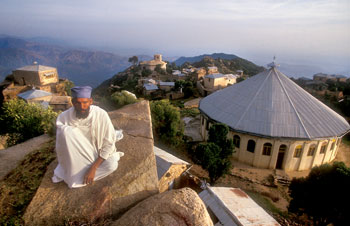 Eritrea is a country that fascinates everybody with its centuries old traditions, rich history and oral history. Just when you think you know it well enough, you find there is much more to discover. According to Historians “The Peripheral of the Red Sea” 70 AD and “The Christian Topographic” 525 AD. The Adulis Empire was a vibrant trading center with a highly centralized polity who had a well sized population actively engaged in commerce and entrepreneurship.

Adulis Empire extended its trade as far as India and Eastern Rome. Eastern Roman Empire was founded by Emperor Constantinus (306 AD-337 AD) who built the magnificent St. Sophia Church in Constantinople in to-days Istanbul. Constantinople became center of Christianity and the capital of Eastern Roman Empire. The “Nine Saints” who came from eastern Roman Empire spread Christianity into the Eritrean country-side and established their monasteries. One of the magnificent treasures of Eritrea is the church and monastery starting in the 5th Century.  In present day Eritrea you will find the treasure of some of the most ancient people that inhabited Africa situated by the shore of Asia and Africa.

The Dabra Libanos monastery at Kesad Daro in the Southern region architecturally can be compared to the more recent monasteries, although it precedes them by centuries. The Monastery near Hagaz in the Anseba region the Tsaeda Emba will amaze you with the mastery of their builders, artist, woodcarvers and writers of the manuscripts; as well as the splendid combination of natural environment and location of the Monastery. Monasteries are some of Eritrea’s biggest historical treasures. Some of them date back to the Adulait time, while others were built on the site of destroyed pergola.  Some are impressive with their unique architecture, others with their valuable icons and skillfully made murals and still others with their location in the most spectacular landscape of the country. There are numerous rock-hewn monasteries most of them not functional, but yet very interesting site to visit. Eritrea has rich history in its churches and monasteries. Ancient Saint Libanos  Mata’a believed to be Apostle of Eritrea in the 5th to early 6th century AD lived in the pagan area north of Marab-melash in today’s Eritrea.  The other famous Saint lived in Dabra

Libanos in the 13 Century. Saint Takla Haymanot as the legend states prayed 24 hours for twenty-two years standing on one foot. The hidden treasures of Eritrea start from Southern region stretching all the way to Central, Northern Red Sea, Anseba and Gash Barka region and are monastic. The monasteries were built in unreachable and isolated area, such as mountain tops, cliff ledges, wilderness, isolation and separation from the secular world.

In Anseba region Dabra Sina monastery lies near Adi Takalezan on mount Salaba. Dabra Sina was founded by monk Yohanni who migrated from Egypt with his followers in the 6th century AD. The monastery has rock hewn church several chapels and buildings. The old customary church has two symmetrical doors. There is a rock that is venerated where the holy family escaped from the hands of Herod’s soldiers during their flight from Egypt. Leaving Dabra Sina headed towards Keren the capital of Anseba region one will find the old Shinduwa monastery near the village of Jegertab on a hill that dominates the Asmera-Keren road. Tsaeda Emba monastery located south west of Keen is 2500m above sea level

imposing and magnificent protrusion that tower over the upper and lower plains of Barka. Its scenery is breathtaking. Abune Seyfe Michael set up the monestary in 17th century.  Tsada Emba is known for its collection of several illuminated manuscripts, embroidered robes and artifacts.

In the Southern Region there are several hidden monasteries with high value tourist centers.
Dabra Libanos monastery located 30 km south of Asmara north of the village Kesad Dara is believed to be the oldest monastery in Eritrea. According to oral history Abba Libanos in late 5th century found this monastery. Situated in the middle of a wide hilly area close to waterfalls with caves; tourists might find the secret entrance to the monastery interesting.  Dabra Libanos is among the most remarkable monasteries with its ossuary and relics of monks. Qedus Yohannes Metmaqu monastery is located South-West of Dekemhare near the village of Maie- Idaga on a golden brownish cliff named Tedrer. Folklore say that Saint Yohannes (John) travelled in the region in 537-545 AD he had a dream; to build a church near the Spring Valley and to dig a cave at the top of Tedrer where he was later buried. Enda Abba Endreys monastery is situated West of Debarwa city near the village Addi Falasit. The Almighty had ordered Abba Endreyas to settle on top of the mountain that appeared like Golgotha Mount in Jerusalem

overlooking the river that looked like the Jordan River. The monastery is reached from the South by a steep path a huge natural cave with spring water. The cave consists in a deep part of the tomb of the Saint. From there a steep path leads to the living quarters of the monks. Maryam Tsion monestry located in Adi Quala city was founded in the 17th century it is known for its paintings related to the Holy Bible. The most interesting painting is that of Arius excommunicated by the Council of Nicaea in 325 AD, Semon, and Abba Abib crossing the Red Sea on a skin. Besu’a Amlak Godeyti monastery near the city of Dekemhare on a hill dominating Maie Ushate river, a tributary of Gergera dam was founded by Abba Amlak, a saint, sent by God to save souls from the Purgatory. Paintings in “Chapel of Ascension” show Abba Amlak riding his horse pulling out souls, hide them under his coat and ascending to paradise. Enda Abu Yonas Laelay is a monastery found near the village of Kudo Falasi on top of a hill with an old abandoned church with the traditional Eritrean architectural parts Narthex, Choir and Holy of Holies. Dabra Bizen Monestary famous and known to most Diaspora Eritreans is located in the Northern Red Sea region towering above the city of Nefasit and rules the roads to Massawa, Asmara and Dekemhare cities; founded in 1390 by Abba Philippos. Bizen monastery is a place of convention for saints, righteous, humble and generous based on the principle of “prayer and Work”. At the end of Antiquity, Christianity had reached wide in Eritrea. Countless ruins of churches and monasteries are evidence of this.

Eritrea offers experiences full of ecstasy, emotion, tranquility and harmony a legacy that reveals itself in hundreds of historical monuments, an abundance of natural beauty. The ancient monasteries that hold liturgical objects, clay tiles, paintings, and mosaics based on Christian themes are testimony to a Rich Heritage which evokes the life and worship practices of great civilization.