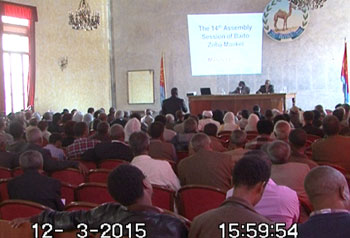 The Assembly of the Central region held its 14th regular meeting on March 13.

Asmara, 14 March 2015 – The Assembly of the Central region held its 14th regular meeting on March 13. Speaking at the meeting in which Maj. General Ramadan Osman Awliyai, the regional Administrator, representatives of the PFDJ, national associations, line ministries and Administrators of sub-zones took part, Mr. Abraham Semere, Chairman of the Assembly, stated that accomplishers have been registered in line with the resolutions adopted at the 13th meeting, and that commendable accomplishments could be registered thanks to active public participation.

He also explained that the self-reliance and independent political path based on organized and conscious citizenry are providing impetus to ensuring social justice and economic progress. Mr. Abraham further called for paying due attention to human resource development, making

effective follow-up and control in transport service, in addition to  soil and water conservation.

During a discussion conducted as regards social service facilities, it was indicated that persistent meetings have taken place with Administrators and heads of the Education Ministry so as to reinforce the teaching-learning process. In this connection, commendable outcome is being registered towards promoting health wellbeing.

The participants of the meeting conducted discussion on views presented by executive Assembly members, and adopted resolutions on a number of issues pertaining to proper utilization of water resource, strengthening efforts made in prevention and control of accidents and crime, besides facilitating land allotment for residential purpose, among others.

In closing remarks, Maj. General Ramadan Osman Awliyai, Administrator of the region, noted the significance of persistent follow-up on the part of Assembly members as regards programs set for implementation. He also stated that efforts would be exerted to meet demands of the public on priority basis.